House Viduggla is a relatively quiet family living in the northern reaches of the Regalian Archipelago, but one that claims an ancient, consistent lineage going back 300 years. They claim to be descended from a legendary warrior, blessed by the Old Gods in the form of a Brown Owl, which they have kept as their crest ever since. They swore fealty to the fledgling Regalian Empire over two centuries ago in their desire for revenge against the Skagger Horde and in return for their service, they were ultimately given land where they have lived since the end of the Skagger Wars. From this height, however, the family started a slow slope of decline which they have only recently been able to bounce back from. Today, the Viduggla family seeks to help protect the Old Faiths and Velheim Culture from the encroachment of the Regalian Empire as well as aid in the state’s military efforts. 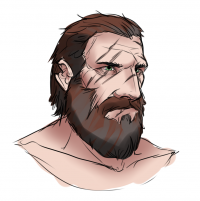 Many Viduggla, of both sexes, are weathered by hard lives in the military or from the rigors of hunting.

Ardige Viduggla is the current ruler of House Viduggla. The House has gone through a series of leaders in recent years due to external politics and other factors which disrupted more traditional lines of succession, but he is now back in control of the House he once led. House Viduggla has had an unbrokwn line of leadership, usually from oldest son to oldest son, dating back as far as 59 AC with Kjell Viduggla, the first Viduggla known to Regalian records. The House's territory has long been within the islands off the northern coastline of Drixagh. They also briefly held lands in the Kingdom of Nordskag but those claims were given up several years ago to focus entirely on the Regalian Archipelago.

The northern tip of the Regalian Archipelago is a bleak place for anyone to lay down roots, but the Vidugglas have succeeded in surviving here for years. The Viduggla lands have long been ones of the sea, with a large population of fisherpeople plying their trade there since the Ailor reached these lands untold centuries ago. However, the land that these people live in is very decentralized, even for the Velheim. Large swathes of the land territory in the Vidugglas holdings have not one person as the harsh sea winds and frozen ground make living tough. Fishing villages dot the coastline while the interior is home to patchy forests and vast glaciers. The Viduggla family lives near one of the only forests in the region in a structure of Velheim design. Viduggla territory is almost entirely faithful to the Old Gods. Unionists, by comparison, are confined to several villages and show little likelihood of growing in number.

House Viduggla occupies fairly poor territory in terms of revenue for themselves. The cold land makes it difficult to farm most crops, which results in much of the foodstuffs supplied being what can be harvested from the waters around the region or exported into the area. Minor industries of mining and making money from shipping the ice elsewhere, into warmer climates, do exist but overall, the House is one of the less financially secure in the Regalian nobility.

As a Velheim House, the Vidugglas have long had the capacity to call upon a collection of hardy and fierce warriors. Most are land-based forces, skirmishers, though few are Skaggers since the Burning of the North, but also the lack of any major Lodges in their region. In addition to these land troops, ships designed for raiding and the men that crew them can be called upon to serve the House in their conflicts as the extensive coastline of Viduggla territory gives them great access to such individuals. They were once disallowed from possessing ships, but have recently been given that right back.

House Viduggla had a quiet relationship with their neighbors for over a century, but under Garth Viduggla, such relations vastly changed. Before the Iron Peace enforced in the summer of 307 AC, the Vidugglas conquered and then dissipated the power of one minor Velheim House, absorbed the remains of House Sorenvik, and waged warfare against several nobles from Greater Calemberg. Their disruption of social normality was greatly disliked by many, and for a time Garth Viduggla suffered under the appearance of being a warmonger. As for those lords directly local to their territory, their longtime loyalty to the Vidugglas had them go along with Garth’s desires without much question. However, since the First Iron Peace, things have greatly calmed down, and most of the local Velheim have returned to a somewhat neutral opinion on House Viduggla.

As Velheim, House Viduggla has neutral to poor relations with the Imperial Court. Emperor Cedromar disliked the Culture, and Emperor Alexander as at best neutral in his opinion of this particular group of Velheim.

House Viduggla has a strong Cultural Reference to Brown Owls, the creatures who supposedly were the instrument of blessing from the Gods upon their ancient founder. The creatures are commonly incorporated into the House’s weapons, in both bone and wood carving form, and the forest near their Norrland estate is also known to house the creatures. The animal is also symbolic of many of their leaders, many being named as stern and silent men, and of great skill in the hunt, just like owls.