The Crow Eagle is one of the animals known widely for its symbolic value to the aristocracy in Aloria, particularly the Ailor race. The bird has ties back to the old Wirtemcaller Kingdom and after having survived an attempt by the Skagger Horde to drive them into extinction, are now recovering in number across the three Calem regions of the Regalian Archipelago; Calemberg, Opper Calem, and Hinter Calem. With its large size, crested head, and an attitude of superiority over other avian species, it serves as the perfect figurehead of the Alt-Regalian culture which formed out of the fallen Wirtemcaller state.

The Crow Eagle has a long-established history with the Ailor. A predatory creature, it gleaned early respect from the proto-Alt-Regalian and proto-New Regalian societies, forming in the forests and fields of what now makes up the three Calem Regions. As they united and founded the Wirtemcaller Kingdom, the Eagle became a symbol of aristocratic power alongside the White Calemberg Fox. Both animals were frequently depicted alongside nobility in wall murals, and the bird was also domesticated during this period. The large, crested bird was a terrifying sight in any a Wirtem court. As time went on however, incursions by the Skagger Horde cut the bird’s numbers as their habitat was destroyed, and since the Horde specifically targeted the animal for its symbolic value to their enemy. By the time the kingdom had dissolved, only 500 Crow Eagles were estimated to have remained in the wilderness.

In the following years, things looked grim, but with the arrival of the Regalian Empire came hope for the species. Their reclamation of most of the Kingdom, even before the lull prompted by Henri I’s guilt, gave the wild members of the species breathing room. As for those in captivity, the pressure taken off of major cities allowed them to fare better and for nobles to resume their breeding. By the end of the Skagger Wars, their numbers were recovering, however, the relentless culling of the species by the Skagger Horde had taken its toll. The population would only rise slowly and it has remained this way since. The bird is still associated with the region, particularly with the Alt-Regalian culture which grew out of the blueblood Wirtemcallers who survived the collapse of their society. In addition, conservation efforts in the Inner Calemberg Wald have made progress in recovering the Crow Eagle’s numbers, but it will take at least another century before the bird flies in the quantity it was once known to. 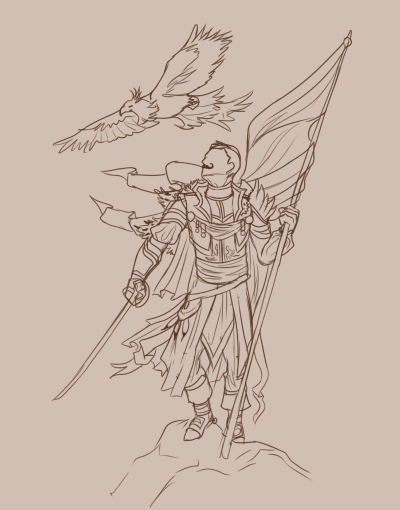 The bird is commonly found in Calemberg military artwork and propaganda

The Crow Eagle is one of the largest birds in the Regalian Archipelago, three and a half to four feet long, with a wingspan of six and a half to seven and a half feet, and a weight of anywhere between ten to twenty pounds. They have large, broad wings made for soaring with two tails of feathers, both thin, fanlike and often out of sorts. Their heads are similar to those of other birds of prey, with two sharp eyes (colored yellow, red or orange), and a large yellow beak but with the unique trait of a crested head. Their feathers flare back on the top of their head and the head itself is distinct from the rest of the body due to a collar of similarly flared feathers facing outward at the neck point. This is supported on two black taloned, white-feathered feet, which is also the coloration for much of the animal’s underside. However, their head feathers are light or dark grey, while their wings are divided into two colors: white for the primary and marginal coverts, all the other feathers being black. Their backsides, and most of their tail feathers, are black as well, with a smattering of white forming some streams of grey in their double tail.

Male Crow Eagles are on the larger side, averaging larger than females by a significant margin. Their feather colorations are somewhat random beyond the general areas colored based on how each individual moulds and preens or removes their feathers. However, the older they get, the more their grey patches spread. They are also equal in gender numbers.

The Crow Eagle is born as a single beige-light brown egg, speckled with black spots. They are most common as a single product but occasionally two are laid. Once it has hatched, the chick or chicks will be dutifully cared for by first the mother but then, after a month, the father as the mother reaquaints herself with the hunt. After six months, chicks are able to stand and walk around, getting used to perching while their parents continue to provide for them. After a year, the bird is able to start learning to fly and to learn to hunt. This stage of their development lasts a further year or year and a half as they grow, develop, and mature into young adults. At this point, the child leaves the nest to form their own nest elsewhere. Mating rituals are highly secretive as the Calembergers actively protect them, however scholars assume that a male constructs his nest and then somehow attracts the attention of a female to examine it and mate with him. Regardless of how a mate is chosen, the bird mates for life and begin their family the following spring. While they raise one or two egg into adulthood (about a two and a half year period) at the same time, they do not have eggs each and every spring. Males and females in the wild live anywhere between 25 to 30 years while domesticated varieties of the bird last for up to 35 years.

The Crow Eagle is one of the most noble and proud animals in Aloria, with a complex system of behaviors. Within its family, mated pairs are highly considerate. They preen the other, namely because some key areas like the double tail are out of reach but also as a sight of affection to keep the other on balance and successful as a hunter. They also share prey, eating together and are occasionally known to hunt for the other. They take good care of their children and try to show them all the needed skills for their survival out in the wider world. Members of the species also rarely screech at each other, being a bit more gentle and “cooing” or rapidly clacking their beaks at each other. They only shriek when in combat, are in danger, or are extremely angry.

To other members of the Bird Kingdom, the Crow Eagle displays a indifference. It does not seem to possess the same concept of territory as other of its kind. The animal, when hunting for food, targets small mammals such as rabbits or fish from the ocean or river, but has been known to resort to eating carrion. They tend to circle very high up and head down lower before diving in to drive at their prey. When the animal is domesticated they display many of these same traits however, their intelligence is known to shine through even more. Named because of this intellect, similar to that of the Dragged Crow and others of that species, they can perform problem solving. However, due to their rarity, they are not commonly seen performing tricks as the Calemberg elite instead keep them safe and secure, occasionally bringing them out for the hunt. The only times they can become violent towards Humans is if their child is mishandled or calls out for them and they are not there or able to help them. Hence, training Crow Eagles is often a family affair.

Crow Eagles are not territorial animals, their nests known to even be built close to each other on purpose so as to keep their neighbors and their children safe should predators arrive. These clusters are rarely bigger than three or four mated pairs.