The Dorkarth Bloodline is a waning yet still powerful Bloodline that hails from the Princedom of Dorkarth, the only Vampire state in the world that still resides somewhere on the north-western coast of Ellador, locked in an eternal war with the Isldar and the Dwarves and Ailor colonists, long after the Vampire Wars ended, and any memory of these secret wars passed into myth and legend for the common Regalian. The Dorkarth are the most resilient of the Vampires, having weathered wars with others and even sabotage from Bloodlines within. The name of the Dorkarth Princes (a term used to describe both female and male Dorkarth leaders) still echo, even among Covens that have long pledged their allegiance to other Bloodlines and other pursuits than the chase after a Vampire Empire. Almost every other Bloodline that exists today once descended from the original Dorkarth Princes, all fourteen of them, that ruled with an iron fist from their Dorkarthi Dreadforts, flying castles held aloft with black magics that terrorized the countryside, captured blood cattle and moved on to their next victims at the height of their power. While many of the modern covens would dismiss the Dorkarth as outdated and too strongly controlled by their worldly designs of megalomania and conquest, they still pose a considerable threat, as the Vampire armies of the Dorkarthi Princedom still exist, and the Moratoriums left behind by the Dorkarthi agents spreading across the world hundreds of years ago still lie hidden, hiding dark arcane secrets of the crimson curse that will only answer to the Dorkarth Vampires. Indeed, hatred among the Dorkarth for the Werebeasts is strongest, once their pets and enslaved warriors, now free to fight them at every turn. Dorkarth are beset by enemies from everywhere, but more than equipped and capable to take them all on. As the stewards of Vampiric culture and history and the dark arts of Vampiric lore, the Dorkarth are begrudgingly acknowledged by the other Bloodlines as indispensable in the fight against those that would eliminate all Vampires. 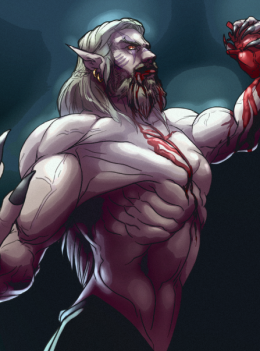 Dorkarth Vampires are unpleasant, even among Vampires. They have a greed, an ego, and a lust for blood and power that is not rivaled by any other Vampire Bloodline. This is largely because the Dorkarth are also the closest related to the First of the Vampires, blessed, or tainted depending on your perspective, by the Archdemon. Dorkarth Vampires have closer ties with those of the Faith of the Dark Ancients and Evolution Cultism, and their affiliations with the Void are more clearly pronounced than other Vampires who might simply skirt around the Void when it suits them. Dorkarth are always ambitious and driven to seek out self-betterment, not content to survive and merely live on by in Crookback or in the Sewers, aiming to live in Estates and Palaces and domains of their own. Dorkarth Vampires have a level of disdain for other Bloodlines as "those who have forgotten the old ways", but are readily willing to subject them to their rule, if it means using the lesser Vampires and devolved Vampires to do their bidding. Within a Coven, Dorkarth Vampires are also merciless when it comes to internal rule. It takes a strong Dorkarth ruler to retain control of their Coven, as other Dorkarth always seek opportunities to challenge their rule and replace them as the new ruler. Dorkarth are cruel and sometimes unusually sadistic, taking pleasure in the anguish and suffering of others, especially Werebeasts.

Dorkarth Vampires fill a unique niche in Vampire society of the lore keeper of old ways, and the staunch and narrow-minded yet strong-headed traditionalist that looks down on the trivial distractions that other Vampires live through. They seek power, not through standing in the shadows of someone else, but by being part of the wheel that moves power forward, or by being at the very top of it all, commanding legions beneath them and tearing down the rotten boroughs of non-Vampiric authority around the world. Dorkarth Vampires rarely work well with others, but are content to subject other Vampires to their machinations and designs, one daydreaming of sharing in the glory and fame of the Dorkarth Princes, and commanding their own Dreadfort from which to spread their influence from the sky. The Dorkarth frequently work to undermine the Regalian Empire, perhaps not to embroil it in chaos and overthrow it through revolution and rebellion, but by corrupting it from the inside, and subjecting it to their own control and power. They seek to usurp the Empire and declare the Dorkarthi Empire, ruled by the Dorkarth Princes, and perhaps, any Dorkarth capable of realizing this dream might one day also be blessed by the Void and be called a Dorkarth Prince themselves.

Common Abilities are mechanics that all Dorkarth Vampires have access to, meaning they are implied and it is not necessary to record them on a Character Application, though you may for posterity sake. Important instructions for Character Apps are included in the Vampire Form table row at the bottom.

Form Mutations can only be used in Vampiric Form (Auld Form). Each Player may choose up to 5 Mutations from this list, which must be recorded on a Character Application. Abilities may not be used before the Application is approved. Abilities may only be changed once, repeated changing of Abilities will result in a Character App being revoked. Some Dorkarth Mutations can apply outside of Vampire Form. Where applicable, this is mentioned in the description.