Note: It is not possible to become an Imperial Guard by any means, IC or OOC. This page exists to provide background information on the Emperor’s elite guard force.

The Imperial Guard refers simply to being Guards of the Imperials. Historically, the Imperial Guard used to be referred to as the Tyrian Order, a name given due to the color of the cloth used to decorate the official Imperial Guard armor. However, the name went out of style after a few decades, as the Imperial Guard considered themselves infinitely better than the Violet Order and wanted to dissociate with the “low caste” soldiers of Regalia.

Before the Viridian Coup Attempt, the guarding of the Imperial Family of the Regalian Empire fell to the Viridian Order, which they did rather poorly in the last years before their effort to usurp control over the Regalian Empire. In the wake of this effort, Emperor Henri III sought out a new group to replace their role in his household. He ultimately settled on the Duke of Castor, Duke Harald II Kade-Schwarz, to lead this effort. For most of Imperial Guard history, Harald’s descendants have been the Imperial Guard Commanders, serving with honor and distinction. Harald was given free reign in determining the way that he would form the Royal Guard and was drawn to the idea of overwhelming force being used to defeat an enemy before they became a threat to a person of Imperial blood. As a result, he first sought out the most able-bodied and accomplished physical mercenaries of Anglia to take into the service of the Imperial house. He then relentlessly drilled them, maintaining their perfect physique, and developed other custom aspects for the Order to make them distinct. Rumor has it that he even had an alchemical creation, known as the Castor Serum, developed and injected into his first batch of recruits to ensure their peak muscularity, reaching the very limits of what was possible for Ailor. Regardless of the truth of this, his vision for the Imperial Guard proved fruitful, as two assassination efforts were foiled by his men within their first four years of service.

This first iteration of the Imperial Guard was highly successful and remained so, but under Reginald III Kade-Schwarz during the tenure of Morgann I as Chancellor, it grew far darker and became directly corrupted by the man’s influence. Reginald III actively courted the extreme Hermann von Toberwolleberg, an inquisitor of fame from Wirtem lands, to come and remake his “knight-slayers” into beasts of endless determination and loyalty. To this end, von Toberwolleberg perfected an oppressive process of indoctrination borne out of a combination of torture, experimental drugs, and psychological stress. The main idea behind the practice was to break the psyche of a prospective recruit and then to rebuild him in the self-glorifying image of the Imperial Guard. The Castor Serum, if it did exist earlier, was refined with the aid of Allar alchemists and was used within this second version of the Imperial Guard. This practice continued and, for a few years after the Chrysant War, was even accelerated from looting Allar alchemical secrets. This saw the birth of the Nellon Serum, a potion that remade the musculature of the individual who took it, and created unnaturally physical Ailor, while also unnaturally boosting the few other Races allowed into the Imperial Guard at this time. However, the overall program came under intense scrutiny after the collapse of the Regalian Senate and the deeper involvement of House Kade into the cadet branch that had been in charge of the order since its inception. The entire Serum program was ultimately discontinued, devastating much of the guard force which had become addicted to the drug, but allowed the new commander Reginald IV to form a wholly natural order with new recruits.

This rejection of the Serum took place under the brief reign of Emperor Cedromar I, who also put an end to the intense indoctrination practices that had broken the will of the recruits who had been selected for it and consequently turned them into dispassionate machines of duty. Cedromar’s rejection of the extremes endured by the guard force normalized them, and while they certainly lost some of their superhuman features, the Imperial Guard experienced social warmth from the Palace for the first time. Emperor Cedromar routinely treated the Imperial Guards as a family, sleeping in the same barracks and eating food with them in the mess hall, and even playing cards during leisure hours. The Emperor always showed great personal care to each individual Imperial Guard, changing the Imperial Guards from a hyper-aggressive, antisocial Warband into a group of extremely loyal, tightly knit protectors who are loyal to the Imperial Family due to Cedromar’s care of them, and no longer because they have no choice. Alexander I has not continued this practice himself, but Cedromar does still visit the barracks, and other Imperial family members retain close friendships with the Imperial Guard’s members. 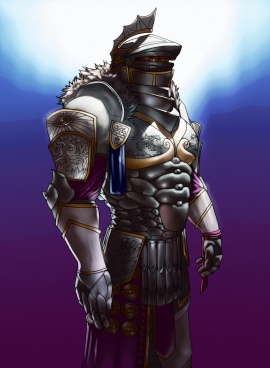 Imperial Guards have some of the heaviest classified armor, made largely out of Blacksteel.