Being an early prodigy of the Order, Jean-Christophe was among the early generations of the Viridian Order. Despite sharing the ideals of those golden days, the would-be Primae was unknowingly a result of much corruption and nepotism within the Viridian Order. Jean-Christophe was one of the most impactful Primaes in the history of the Viridian Order, despite such being done mostly indirectly. In his lifetime, he oversaw the collapse of the Order’s prestige and power in 122 AC, following the events of the Viridian Coup Attempt. Despite not actually partaking in it, his lack of foresight and indecision directly led to the outbreak of the Coup, and he was summarily executed by the Emperor Henri III for such reasons.

Jean-Christophe was born into the affluent and empowered House Ivrae de Sange, the sitting Imperial Family of the Regalian Empire. Despite not sharing direct royal lineage, he was part of the wider scope of the Ivrae family, growing up in an exceedingly wealthy household. His adolescence was primarily found in one of the family palatial estates within the Regalian Capital, and at an early age he was exposed to the Viridian Order. Ithanian leadership was commonplace within the Order, and House Ivrae saw benefits in stacking their less important members in their ranks. At the age of ten, Jean-Christophe was formally enrolled into the Viridian Order, leaving home to go train with the elite knights of the Empire. He was known to be something of a scatterbrained Page, often forgetting various tasks he was supposed to undertake, or other small points of his daily routines. This caused him to fall behind in his training somewhat, and the Ivrae would end up graduating from Squire to Man-at-Arms at twenty two, two years after most others did.

During his time as a Knight, Jean-Christophe was an active participant in the Skagger Wars, and quickly grew a fine reputation as a valued swordsman within the Order. Primarily, he became rather famed among many for his disposition to mounted combat, and if it weren’t for his eventual legacy-shattering actions, he might have been known for popularizing the combat form within the Viridians. His success and feats during the Skagger Wars, and multiple Grand Tournament victories, earned him the rank of Paladin by his mid 30s. Jean-Christophe ended up being called back to the Castle after some time to teach mounted combat to Squires more officially, eventually becoming an Elder as he was increasingly scaled back from active combat duties. As an Elder, Jean-Christophe served a pivotal role as a moral leader within the current Primae’s council. Unbeknownst to him, the Order had become somewhat more corrupted by power during his lifetime, something the Primae at the time, Olivier de Loisse, was heavily involved in. However, there were still many Elders who shared Jean-Christophe’s moral views and wholesomeness. This faction of Elders saw to his own appointment of Primae come de Loisse’s death in 110 AC. Despite this victory for the more pure Viridians at the time, the next decade would prove disastrous for said faction of Elders, as they were systematically undone by the corrupt few within the Order. By 120 AC, Primae Jean-Christophe was effectively surrounded by anti-Imperial sentiment.

As the title of Emperor consistently changed hands during the Years of the Three Emperors, Jean-Christophe noted the increased friction between the Viridian Order and the Imperial Family. Being a rather weak leader to his underlings, the Primae found immense trouble in effectively controlling the Elders. These Elders and even some Paladins did not share Jean-Christophe’s loyalty to the Emperor, and wanted to, in their eyes, safeguard their power and privileges they had received over time. Jean-Christophe attempted to rectify the growing problems, but found this fruitless, and the situation rapidly grew out of his control. In the month before the Viridian Coup Attempt, the Primae pushed forward the December Accords, which were a codified set of new regulations for the Order aimed to regulate Elder authority over the Paladins and Men-at-Arms for a certain time. It was a last ditch effort by the Primae to secure some amount of control over the situation, but only served to broaden the gap between himself and his underlings. The Elders rejected the Accords, and moved forward with the coup by the New Year of 122 AC

Jean-Christophe only had one last way to recover his honor, which would also be the cause of his death. Hours before the Coup, the Primae alongside five other Viridians informed the Emperor and his council about the ensuing event, which was enough time for Henri to order the arrests of the conspiring Elders and Paladins. What Jean-Christophe didn’t expect was his own arrest. Surprised, but steadfast, the Primae accepted his punishment without protest. The day after the new year, Jean-Christophe was executed for gross negligence of duty. He was summarily replaced by Primae Richard Daladier, but the Order was effectively crippled from being stripped of its powers and prestige following the coup.

Jean-Christophe was primarily known for his rather muted and reserved nature, part of what led to his ineffectiveness at preventing the Viridian Coup. He was known to have strong, passionate views about the Order and morals in particular, but wasn’t good at expressing them when placed in the spotlight of leadership. While not a dim-witted man, the Ivrae was easily outmaneuvered by his underlings, as he did not possess the political foresight or even just a general cleverness that could have aided him. Fundamentally, he cannot be called a malicious person, though. He was quite kind and well-mannered, and possessed a natural, bashful charisma that helped lead him to his positions of power. 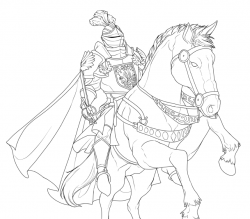 Jean-Christophe's horsemanship tactics are still used by the Viridian Order to this day.

Jean-Christophe might have been a very effective Paladin and Elder, but an irresponsible and negligent Primae. Most historians ascertain that Jean-Christophe’s heart was in the right place, and should he have had come to grips with the Order’s increasing corruption sooner rather than later, the Viridian Order might have avoided their own self-destruction. Before his tenure as Primae, Jean-Christophe held a good reputation as an Elder, trying to do right by the Order and his own honour. It was only his debacle of leadership that tarnished his reputation and potential legacy, leaving him as posthumously being known as “The Poxy Primae”.

Clearly, Jean-Christophe had multiple extended family members in the form of the House Ivrae de Sange. While not royal himself, he still possessed cousin ties to the Imperial Household, meaning his executor in the form of Henri III was actually his kin, even if extended. Many historians attribute his ascension to Primae partly due to his family name, believing an Ivrae could mend the gap between the Order and the Emperor(s). Incidentally, his opponents in the Order also used his Ivrae surname against him, citing he was but an “Imperial Lapdog”. However, neither side was entirely right in their assumptions and predictions. Furthermore, it is said House Ivrae somewhat washed their hands clean of Jean-Christophe after the Coup, and he was the last member of the House to ever hold the title of Primae.