Leutz Fencing is a fencing sport practiced mostly by the upper classes of Regalian society and those of the Leutz-Vixe Culture for its competitive and leisure habits. Originating as a means to settle conflicts between non-Knights, the sport slowly developed alongside the Leutz-Vixe, taking the militarized concepts of honor from the New Regalians, while blending it with the Ithanian avoidance of needless bloodshed. Earning a rivalry with Dressolini Fencing over the years, Leutz Fencing has gone on to be the popular recreational sport in the Regalian Military’s officer corps, as well as being the standard for conducting honor duels empire-wide.

The concept of the honor duel is hardly a foreign concept to the Ailor Race, the notion of fighting for one’s personal values against the other having its roots in the Ceardian kingdoms before the Cataclysm. As the Ceardians migrated out, so too did these concepts of fighting with honor, and soon gained a following in the various states of the Regalian Archipelago, most notably in the Wirtemcaller and Regalian Kingdoms. When the Five Family Rebellion concluded, it led not only to the creation of the Regalian Empire, but the concept of knighthood with the Viridian Order, led by Julian de Montverrat. Soon the concept of the honor duel began to take its modern form, and members of the nobility would soon send their children to the Order, who in turn trained these sons to become master duelists against one another.

Over time, the Regalian Empire expanded, and soon took over what was left of the Wirtemcaller Kingdom, further refining the military values of the growing Ailor state. As the New Regalian Culture began to solidify its new identity, the southern lands in modern day Osteiermark began to see an influx of Ithanian migrants, who would soon turn into the Leutz-Vixe. With the honor duel at this time seen as a sport solely for knights, Leutzmen began to experiment with opening up the activity to anyone in high society. With a desire to focus on the personal ability of the fighters over the bloodshed, the locals began to set up specific rules to limit the amount of harm done to each individual, while creating a weapon designed to fulfill the needs of the duel: the Leutz Épée.

With a standard weapon created and ground rules established, the Leutz-Vixe began to formulate their recreational activity, earning the interests of their New Regalian neighbors, who immediately adopted the refined sport as a mixture of artistic talent and physical prowess. Over time, the sport became ingrained in the local societies, with members of the nobility taking an interest in using the Épée against those who slighted them rather than summoning a personal knight to fight as a proxy. While the knightly duels still continued and exist to this day, Leutz Fencing has slowly overtaken the former as the prime means to settle disagreements with the upper classes and remains such to this day.

While Standard Osteiermarker rules are the most widely known and accepted in the sport, there has been a variant created to cater to the New Regalians of the Calemberg region. In the Calemberg rules, the Leutz Épée is replaced by the Calemberg Cavalry Sabre, a weapon that is more commonly available for the men of the region due to the School of Drixon specializing in its usage. Calemberg Fencing also appears far more aggressive to the spectators, as duelists can only ever be the aggressor or defender in a session. Finally, it is expressly forbidden to strike the lower half of the body, a symbolic gesture to acknowledge that Sabre wielders are often cavalry riders as a profession, and as such their legs must be kept unscathed in order to ride effectively. 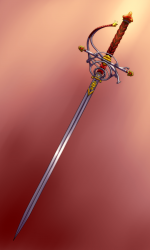 The Leutz Épée is a well-known symbol of both the Leutz-Vixe people as well as the sport itself.

The Leutz Épée is highly standardized because it is used in sport. It is very important to participants that their blades are identical, as any loss would be blamed on unfair advantages. From hilt to tip, the blade is exactly 3 feet long. The grip is a pistol style grip at a 110 degree angle from the direction of the blade. A bell style guard would almost completely cover the hand of somebody who would hold the Leutz Épée. The blade itself is very thin and somewhat flexible. The length of the blade itself is not sharpened at all. In sport versions of the Leutz Épée, there is a small hollow ball at the end to prevent it from penetrating the leather armor that is worn by fencers. In dueling versions of the Leutz Épée, the tip comes to an extremely sharp point.

Unlike the plate and chain armor worn by knights in a duel, the Fencing Armor of Leutz Fencing is designed specifically for usage in the sport. Often made of leather or thick linen, standard armor used for fencing has colored regions that determine the point value roughly corresponding to the deadliness of a real stab. Directly on the heart and around the eyes is worth 4 points. The area of the lungs and kidneys and the rest of the head is worth 2 points. All other direct hits are worth 1 point. More rough and tumble lower class Leutzmen also sometimes add an area around the groin that is worth 3 points, though this is considered extremely dishonorable in most public circles, and completely unheard of in the upper classes.

Leutz Fencing focuses on using side to side slashing motions only for the purpose of creating a hole in the defense of the opponent for the purpose of stabbing them. A strict defensive stance is maintained and agility is used to deflect blows (known as a parry) using the Leutz Épée, before a counterattack is made (called a riposte). In the sport style, points are awarded depending on the place that the stab lands on the armor, which is summarized above. Unlike in the Calemberg variant, there is no forced commitment to playing solely offensive or defensive, encouraging fighters to utilize various tactics and techniques to score points while ensuring their opponent does not seize an opportunity to retaliate.

In a dueling setting, the Fencing Armor is not utilized, raising the stakes to exemplify the importance of one’s honor (and sometimes life) being put on the line. Unlike in the sport version of Leutz Fencing, it is expressly forbidden to strike the head or the groin area, as doing so is grounds for grave dishonor and an immediate forfeit from the duel.

In sport Leutz Fencing, the first to score 10 points is declared the winner of the match, which while a simple objective does have its caveats. Any illegal moves deduct points from the total score, so it is possible for a fighter with 9 points to suddenly drop to 6 or 7 due to such point deductions. In honor duels, typically the victor is whoever is the first to draw blood, though some more aggressive duels can have this value increase to the first to three or more. In the most extreme cases, the fighter left alive at the end of the duel is declared the winner, though in recent times duels to the death have been less frequent.