House Peirgarten is one of the powerful noble families present in the Regalian Archipelago, with it’s traces going back to early 200 AC as a Leutz-Vixe blueblooded family. House Peirgarten is known for their strictly matriarchal values, which has often seen them targeted by the male-favoring regions of the realm, but the Countess’ unyielding personality brought acknowledgement to the idea of powerful female rulers. Golden haired with emerald eyes, the Peirgartens are considered as beautiful and alluring as they are sinister and cunning. In spite of having suffered many attempts of conquest from rivaling lordships, their perseverance has seen the House of Peirgarten develop over the years to be recognized as one of the richest and powerful families in the realm, with an intimidating army to match it.

The first traces of the Peirgarten lineage appear in the beginnings of 200 AC, but exact dates to their foundation are still unclear to this day. It is known that the family came about with the uprising of a famed mercenary known only by the name of Florian, a warrior of Ithanian descent whose success in the field earned him ennoblement. The newblooded House Peirgarten would submit its loyalty to the Regalian Empire, and Florian Peirgarten was recognized as the Baron of Lorhauser by Emperor Handorien II, the ill-received ruler of Regalia in their period. 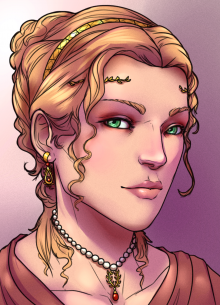 The Lady of Lorenthaus is received by the masses as a leading figure of matriarchal superiority in the realm, and has managed to popularize the image of women in power.

House Peirgarten was negatively affected from the drastic consequences of the event that became known as the Purple Bleeding. Anti-Imperial sentiments ran rampant throughout the realm, and many blue-blooded houses became extinct. It was in this time when Florian would be betrayed by his own generals, resulting in a coup. Although, the menace was swiftly repelled by the successor to the Lordship, who happened to be Florian’s firstborn, Laurent. The family would go through alterations to it’s core with the new leadership, primarily that House Peirgarten began to recognize itself as Leutz-Vixe. Laurent’s rule started proving incompetent, and the lords of Lorhauser noticed it was with the intelligent and domineering approach of Laurent’s wife that the family rose to prominence. Eventually, illness overtook Laurent, and the Lord suffered from an early death. His passing brought about the leadership of Noemie, and House Peirgarten embraced matriarchal values.

After her tenure as Lady of Lorhauser, Noemie would pass her titles down to the heiress-apparent, Amelina Peirgarten. The change into matriarchy was ill-received by the local lords, especially by other champions of the Leutz-Vixe Culture, namely House Ravenstad. While House Peirgarten found settlement in the newfound lands of Lorenthaus, they would face opposition from the Lords of Brissiaud. The opposition would result in many forms of dismay for House Peirgarten, but was ultimately repelled by decree of Cedromar I, and peace was restored. From that point, House Peirgarten would begin to come into the fore-front of noble politics, and to this day, have held various important positions. The Countess would go on to become the Lord Chancellor of the Empire in the year of 307, governing the realm with an iron fist. Although many things can be said for her strenuous and violent tenure, it is undeniable that the period brought immense consequences for the Empire. To this day, House Peirgarten exists as one of the major families in the archipelago, lording over their ancestral realm of Lorenthaus.

The Peirgartens rule over their ancestral lands of Lorenthaus, which came to be around the same time as Osteiermark, its eastern neighbour. The lands are largely populated by those of the Leutz-Vixe culture, but since the influence of House Peirgarten began to expand to the west in the year of 308, which brought about the possession of a majority of Vixhall, their lands are actively frequented by the Dressolini and Ithanians, and on a lesser extent, the Burdigala. Lorhauser is visibly neighbored by the holds of the Iron Prince of Vultaro, who formed a loose and aggressive alliance with House Peirgarten during the Countess’ tenure as Lord Chancellor. While this alliance was temporary and strenuous at best, it brought about dire consequences for the realm, and as of current, further aggressions are expected to arise due to the placements of the two lordships respective realms in the archipelago.

The Peirgarten family houses various familial manors and estates in Lorenthaus, but the most notable is the family residence known as Schlass von der Goldblumm, literally meaning Goldflower Castle. Goldflower is the ancestral home to House Peirgarten, a well-fortified castle of enormous size that overlooks the water which divides Lorenthaus from Osteiermark. It is considered to be one of the most beautifully constructed castles in the area, possessing enormous gardens that span out across entire countrysides with an incredible variety of flowers, and is known for having a magnificent view of the neighbouring Wirtem lordships. There exists a vineyard that spreads down the hill which the castle is placed on, considered by many to be the mother origins of the wine that the Peirgarten family manufactures today. 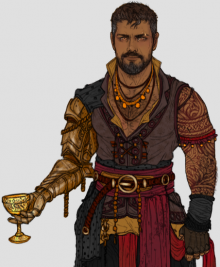 Rodrigo Peirgarten is a controversial political figure for his brutality in war, having earned the notorious reputation of a deceitful conqueror and mass-murderer.

In matters of finance, few families in the realm can hope to compete with House Peirgarten. The Peirgartens of Lorenthaus are the leading manufacturers of wine in the realm, among the trade of gold, copper, and precious fabrics and silks. Over the years, their apparent success in arrangements of trade has seen the family brought into daylight as one of the most financially capable families of the realm. Indeed, when one ponders of the richest families of the Regalian Archipelago, the golden-haired Peirgartens are always among the primary names to come to one's mind, having made fame of their incredible wealth over the years with their rich banks, obsession with gold, and their unscrupulous spending on pleasures and precious items.

In the origins of the families foundation, House Peirgarten was considered to be militarily incapable. This weakness was further emphasized after an invasion into Lorhauser lands several years ago, which saw the decimation of the Countess’ personal militia, and left them defenseless. However, over the course of the years that followed, and with the support of several expansionist organizations that sought for the family to enter aggressive map-making politics, the Peirgartens managed to develop an intimidating army, with which they’ve cultivated various levels of success in the field against a number of foes. In present day, House Peirgarten prides itself with a considerably large and fearsome number of troops in service to their lordship, adorned with the most extravagant and eye-catching armor crafts for both infantry and cavalry alike, led by competent field commanders, all of whom are overseen by the warlord Count-Consort of Lorhauser, and answer directly to the Countess.

Ever since the Peirgarten family embraced values of matriarchal rulership, the lordship of Lorhauser has often been at odds with it’s own baronial court. It is unsurprising that the local lords of Lorenthaus had a hard time acknowledging a female rulership over Leutz-Vixe realms, and this distaste was only further enhanced by the Countess’ marriage to a commonborn man. These scandalous happenings has, at some points, resulted in small-scale rebellions in the family lordships, and were even more scandalously purged through means of what some politicians consider to be acts of brief military dictatorship, eliminating opposition with sword and flame. In spite of these shaky relations, the Peirgartens have managed to stabilize their control over their government in the recent years, and actively pursue ways to maintain this newfound stability by appeasing their local lords with extended freedom and progressive decisions.

The Peirgarten’s relations with the Imperial Family have always remained fairly distant, since the foundations of their lineage. Their relations are majorly unexplored, and in fact slightly burdened from the Lo Occupation of 305 AC, when the Peirgarten Countess experienced a brief break of loyalty from the Imperial Family. This action was later pardoned by the Emperor, and since then, the Peirgarten family has held and directed various positions in the Imperial Court that serviced the Kade family and their interests, developing into a crown-loyal and well acknowledged lineage. These good relations were recently burdened once again by the catastrophic events that came about in the Countess’ tenure as Lord Chancellor, but in spite of the happenings of the history, Peirgarten is still recognized by the Imperial Family as one of the fore-front families of the realm.

House Peirgarten is culturally almost synonymous with wine, a reference that has become extremely popularized and actively supported with the Countess’ obsession with said beverage. It is further referenced with the facts that House Peirgarten is able to boast being the largest manufacturer of wine in the Regalian Archipelago, and they maintain foothold over a majority of Vixhall, who are culturally known to be some of the most frequent consumers of wine. The Countess’ obsession with wine is such a frequently brought up concept that there even exist rumours among various governmental bodies that the catastrophic measures the Countess had taken during her Chancellor tenure were due to being under the effects of heavy and excessive amounts of wine.