The House von Drachenburg, officially von Drachenburg ober-der-Rauschweiger Lödenthal-Dessau, is a New Regalian noble house which finds its origin as a minor Wirtemcaller Family during the decline of the ancient kingdom. From its days marking the westernmost borders of the kingdom to the starting point for the Reconquest of Calemberg, the March lords of Drachenburg served as the keepers of both cultural and political borders for over two centuries. As a consequence, this key military position has seen the brunt of several armed conflicts, the foremost being the Drachenwald Crisis which saw the collapse of House van Sherburne and the rise of factionalism within Dragenthal. Even with political flare-ups around them, the Drachenburgs have managed to weather the storms, expanding their claims in the region to act as a significant player in the Regalian Heartlands. Today, the family rules over a significant portion of the newly-established Waldmark Realm as an Elector for the Imperial Succession, and continues to serve as a prominent military authority for the Regalian Military.

The start of the Drachenburg House begins roughly three decades after the Five Family Rebellion in 35 AC, but rather than in the infant Regalian Empire, has its origins in the Wirtemcaller Kingdom to the east of the Regalian Archipelago. Having descended from members of the proto-Herebrand knights in the High Duchy of Zavoria, the family’s first patriarch Sigismund was ennobled as a Baron by the Wirtemcaller King. As was typical with new nobility, Sigismund took the name of the main castle he commissioned in his barony, the Drachenburg. However, the family’s early life was faced with several crises, spanning between a succession crisis for the Wirtemcaller throne, to Skaggers taking back the Zavorian Duchy, to a short lived succession crisis of the family’s own titles. Despite this strife, the family would eventually subject itself to the growing Regalian Empire in 111 AC, and would see their title upgraded to that of a Margrave by Emperor Leomar I.

The Drachenburgs would go on to be capable military leaders, earning themselves a position in the courts of House Cadar, who formed their own Marshalry that would be the inspiration of the Regalian Military’s current structure years later. After House Cadar fell and was succeeded by House Typhonus, the Drachenburgs became relatively quiet in the political scheme, dwarfed by House van Sherburne to their direct west. Yet when the Drachenwald Crisis began in 271 AC, the family proved its loyalty to the Regalian State, with their patriarch Günthard III being one of the countless noblemen executed by the Barons’ Coalition after the Battle of Lausitze. His successor Reinhard II would consolidate the family’s power, before he too would fall, this time to Slizzar assassins following the Empire’s victories in the Chrysant War.

Today, the Drachenburgs are led by their 17th patriarch, Dietrich I, who has made notable strides in Regalian politics since his arrival to the City of Regalia in recent times. Through both military and government work, he has seen the family’s holdings increase to include the majority of the Drachenwald Forest, as well as the Baron of Alexanderburgh in Greater Calemberg (which was later ceded to House Typhonus via diplomatic trades). In late 307 AC, through negotiations with the Imperial Family, the Drachenburgs were given the title status of an Electorate, which allows the house to participate in the Imperial Succession. During the same discussions, the area of the Waldmark Realm was created. Comprising the Drachenburg territories and other states that make up Eastern Dragenthal and West Calemberg, this new region strives to form a new identity for itself, which the Drachenburgs aid in forming. 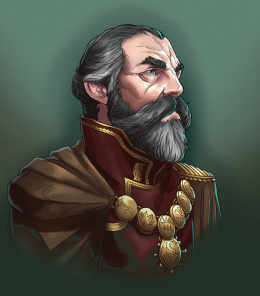 March-Elector Dietrich von Drachenburg is considered one of the foremost proponents of the Purist Movement within the capital.

The Drachenburgs rule over most sections of the Drachenwald Forest, an infamously dark area which has led to several local legends to arise. Within this ancient forest is the Höhewald Gap, a cavernous ravine that stretches somewhere deep within the interior. In the southwest is the Zillerhof Valley, which acts as the geographic border between Drachenburg territory and the Genevaud Cantons, with the Genevaud Alps taking up the southern border of the Waldmark and Lorenthaus. Within this area are several key possessions of the family, which are summarized below.

The Drachenburg’s finances are a product of their geographic location. Bordering several different cultural and trading hubs (most notably having a small network to the Schön River), the family’s border towns and villages enjoy the benefits of mercantile activity. However, this economic success is offset by the natural barrier of the Drachenwald Forest, which is only traversed by a few well-known merchant guilds, many of whom have lived in the region for generations. Furthermore, the family’s status as a border march for various nations over the years has led to a sizable portion of their coffers going towards fortifications and military training. As a result, the family’s economic power can be best described as average, paling in comparison to the Ithanians, but far better off than the Velheim or South Dukelands.

Hailing from Wirtemcaller proto-knights and tasked with securing a regional border for centuries, the Drachenburgs have a lengthy military record, with several patriarchs earning the respect of the militant House Cadar during its lifetime. Utilizing their geography to the highest effectiveness, the Drachenburgs are well known for their scouting units, earning the family a local reputation for “having eyes and ears wherever the woods may lay.” The family also has an extensive record of knightly service, with many second sons going into organizations such as the Viridian and Darkwald Orders. Finally, the mainline has seen capable military commanders during its lifetime, earning them a place in military circles Empire-wide for their contributions both on land and at sea.

Even with the Waldmark creating a hopeful future for the culture of the land, the Drachenburg’s history with their vassals is a balance between two Cultures. Historically, the Margraviate of Drachenburg-Büchner was an Alt-Regalian turned New Regalian area, with the family getting along well with their vassals, many holding ties to the Wirtemcaller Kingdom as well. Though after the Drachenwald Crisis, the neighboring Heartland Ceardians of the Barons’ Coalition began to form feuds with the Drachenburgs over their loyalties during the rebellion. Fortunately, these feuds have all gone away, as Cedromar I personally executed the remaining members of the Coalition, and gave their possessions to new, pro-Imperial families. As such, when the Drachenburgs were given control of most of the Drachenwald Forest, they were able to form positive relations with the local lords. Since then, there has been mutual cooperation between the House and their vassal states, and so long as the family administers their holdings competently, there appears to be no change to this relationship.

The Drachenburg’s relations with the Imperial Court fluctuated during the Ivrae Dynasty, earning better respect with military Emperors than the others. Dietrich in particular was a supporter of the Purist Movement under Justinian II, and has attempted to change it to fit Waldmark customs. In recent times with the Kade Dynasty, the Drachenburgs have earned respect due to their strong adherence to the Honneurs Laws, as well as their military dedication both on the front lines and in the bureaucracies. As an Elector, the family now participates in the selection of the future Emperors, a position which only a handful of houses hold.

The House of Drachenburg has a strong tie to the regional brewing industry, well known for their various beers and lagers produced over the year. With the first brewery opening in 95 AC, the family has spent the better part of two centuries improving on their brews, and creating others in the process. A local custom is the annual beer festival held at the start of the harvesting season, where the current ancestral recipe is tested against a modified one. At the end of the festival, the favored brew becomes the new standard of quality until next year. This ensures that the Drachenburg brand continues to improve over time, adapting to changes in the market and consumer tastes. However, it is this same affinity for perfection that creates a surefire way to insult the family. A Drachenburg is quick to judge a poorly made (or worse, watered-down) drink, and will view it as a grave dishonor. 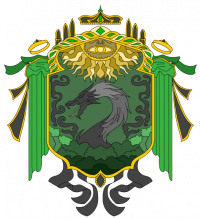 The Drachenburg City Seal is a commonly used second crest of the family.