The Zikiel Bloodline is an elusive Bloodline of Vampires that is rarely seen in Regalia, or indeed anywhere in the world. The Zikiel are seekers of arcane and dark arts magics, learners of the hidden lores and knowledge of old, and collectors of ancient tomes and vast libraries. What the Cratos are to technology, the Zikiel are to the written word and wisdom, scouring long lost temples and places of learning for any scraps from the ancient sages. Zikiel, commonly also called Liches, are almost an anomaly of themselves in the Vampire community because they seem at a first glance so far removed from the other Vampires in appearance and behavior. The origin of the Zikiel Vampires is commonly referred to in "The Tale of Zeer-Kahel the Graverobber".

The Tale of Zeer-Kahel the Graverobber

The origins of the Zikiel do not start with a Dorkarth Prince, but rather with one of the far-removed blood cattle having turned Vampire. Zeer-Kahel was a bottom-feeder Qadir who lived in the Qadir city of Marjataïr in Al-Alus, and was a street-urchin having turned peddler who was in the wrong place at the wrong time. After having served as blood cattle for his cruel captor, he escaped, though only by drinking the blood of his captor and using his Vampire strengths to flee. Once properly attuned to his new Vampiric life, Zeer-Kahel discovered that his affliction gave him extra boons to escape authorities or consequence for his rampant gambling problem as he engaged in theft and grave robbery to always stay ahead of his debtors, but he was still a bottom feeder, as for all the Vampiric power gave him, he still lacked the wisdom to use it. One day, he stumbled onto the ruins of Zarq-Fatinh Aslaqqa, a massive library that was buried deep in the sands, holding many secrets of the Sariyd Empire that had long been swallowed by the deserts. He stumbled into the library that was half-submerged in sand, following a clue from a local merchant that he had overheard talking to another grave robber in an alley. Unfortunately, due to his bad preparation, Zeer-Kahel's rope snapped and he fell thirty feet, straight onto a broken table with shards of wood impaling his legs.

As Zeer-Kahel lay dying, blood caking the sand, and the light from the hole from where he came slowly dying as the cold of night started setting in, he cursed his own incompetence. To make matters worse, the ruins of Zarq-Fatinh Aslaqqa had long been looted empty, there was no shine of gold, no old artifacts to loot and sell. And yet, he refused to accept death in this moment, even if his life had been a miserable disaster from one to another, he would at least go out on his own terms. In agony, he tried to crawl to find a way out, dragging his impaled useless legs around. In his delerium, he had not even noticed the young porcelain-white Altalar girl that was following him slowly, a curious face peering down at this young man's tragedy with curiosity and perhaps a hint of pity. He turned at a certain point, not believing the Elf-ling was real, presuming it was a hallucination of his blood-loss. The Elf-ling asked him if he would bargain for his life, which he decided to muse as he had given in to his presumed end, and chose to go out with some amusement. Much to his surprise however, the Elf-ling rapidly changed into a massive maw with twisted jaws and rows upon rows of teeth, tendrils extending, as if seeking things to consume. The hungering creature started consuming him, but instead of actually eating him, it ate his flesh off his bones, leaving his bones intact. As his flesh left him, he did not feel pain, but rather just cold, coldness all around him.

Just as quickly as the Elf-ling changed, did she disappear again. For a moment Zeer-Kahel tried to inspect himself, no longer in pain, and in full skeletal being, but before he could properly register what had happened, he too felt a hunger. It was like his mind would suddenly snap, no longer capable of higher reason or thought, he became as stupid as a hungry beast that only knew how to eat, and he started trying to eat the books around him, the dusty tomes in languages that he could not understand. He consumed their crumbling pages, almost as if driven by some higher power, fragments of pages, book covers, sometimes even just dust and ashes left behind from rotten papyrus. And with each book he consumed, he could feel his sanity returning to him. Days of consuming turned to weeks, weeks turned to months, months to years, and before long, he had been endlessly consuming books for nearly 50 years, until he heard a scream of another unfortunate traveler, one that had fallen from the same hole he had once descended, and comically, fallen onto the same broken table he had. He wandered closer, skittish at first, but curious after, as the terrified visitor yelled at the creature to go away. Zeer-Kahel could not understand him, for he spoke in a funny language, but as his blood seeped into the sand beneath him, Zeer-Kahel felt a different hunger that he could not understand. He jumped on the stranger, baring his Vampiric teeth, and he drank his fill until there was nothing left of the poor outsider.

When he rose again, his sanity had been fully restored, and there was a newfound wisdom and knowledge in him. He could recall the last fifty years, the years in which he had lived like an ever-hungering and consuming creature. The blood he had consumed had brought order to chaos in his mind, and suddenly the words of what he consumed shifted back in order, the texts started making sense, and he was learning all that he had consumed, fifty years of eating tomes and crumbled books worth of knowledge all with the most brilliant clarity, all at once. The old Zeer-Kahel died there, if there was even anything left of him, and Zikiel, Emperor of the Sages was born. He donned the robes of the dead man at his skeletal feet, and the Arcane winds heeded his summons, years of Sorcery and Magic learned from consuming the pages as he defied gravity itself and rose to the exit, ready to venture into the world. His hunger had never left him, that never-ending hunger to know more and to feed on the blood of others, that sacred liquid that contained their knowledge. But now he could control it, and as Zikiel set the first steps towards the rising sun, his parched white bones reflecting the orange light that filled the sand dunes, in his wake, a terrible blizzard followed, the same cold that he had felt in his bones, he would unleash on the world.

The accuracy of this tale is not widely confirmed, however Zarq-Fatinh Aslaqqa did indeed exist, and a skeleton was found at the base of a table, and the whole library, larger than the Regalian Palace but underground, was completely empty. Not a single book on any of the shelves, and not a single particle of rotten papyrus was left in any of the sand-filled halls. Zikiel himself became a figure of legend, however all Zikiel Vampires still revere his name as the Emperor of the Sages, while some Altalar even dare to call him an Archmage, as his power rivals that of the most powerful Archmages of the Allorn Empire, supposedly. Zikiel has also supposedly been sighted various times across the world, so the scholarly community has largely accepted that he does indeed exist, but some claim that the myths and legends of his power may be slightly exaggerated. 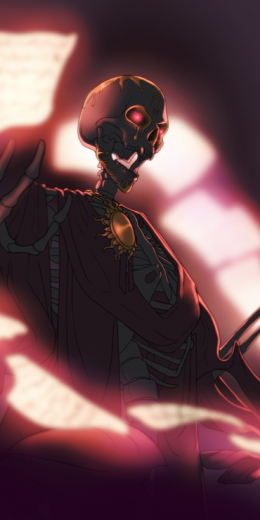 Despite their horrifying appearance, there can be an aspect of fascination with these creatures given their unique appearance and mentality when compared to other Vampires.

Zikiel Vampires are voracious in their apatite, and they have an apatite to compete with. Their hunger for learning and knowledge and blood are high, and to some degree, causing them to lose composure at times when exposed to an exquisite banquet of blood, or a particularly juicy piece of information, rare tome, or knowledge that has been lost for aeons. The Zikiel are usually solitary, and while they will tolerate the presence of other Zikiel, it is extremely common for them to establish constantly shifting hierarchies based in bickering as to who knows the most, or who is the most intelligent. To the Zikiel, blood isn't only a feast, it is something near-holy, they believe that the collected knowledge of a person's learning and life is stored in their blood, and that it is only a shame that the act of learning from the blood hasn't quite been discovered yet. While other Vampires might revel in blood feasts and baths, Zikiel abhor the idea of blood spilling, violence, and fighting, and find the very act of blood being spilled without it being consumed by them to be an affront to their self-identity. Zikiel are soft-spoken, though can be loud if they wish. They are certainly well-spoken, but can have manic episodes if deprived of blood for too long, as blood brings order to the thousands of pages of text that are all imprinted in their memory. The Zikiel are masters at manipulation and control, as such, they are often found as Coven leaders. Even as supporting members of a Coven, a Zikiel should never be left to their devices for too long, as they will always be plotting to take over the Coven, and re-direct its efforts to securing more knowledge (if that is not its goal already). Zikiel frequently also ignore Covens altogether, wandering the world alone in search for ancient knowledge. Their ability to mingle with non-Vampires due to their less-obvious visual traits gives them more freedom to move around and interact with others, albeit while trying to hide their Vampiric teeth.

The Zikiel are at a base knowledge styled Vampires, that always seek to learn more. They are anti-combat scholars and arcanists, sages with a magical twist and with many capacities to disengage and utility. Every one of their mutations is geared to social interactions just as much as it is to enhancing the mage-lich aesthetic. Zikiel have a complex personality, ranging from unpredictable, to outright arbitrary or bipolar, yet with a veneer of class and poise when they are not in their manic state of singular obsession. The Zikiel do not look down or respect the other Vampires, they consider themselves apart from their kind in a way, elevated beyond the base needs and simple squabbles of the Vampires, though they can at times appreciate their company and unique perspectives of things. Zikiel understand that their work is made easier if they cooperate with others, even if just for the time being, and on periods where their blood-lust and knowledge-lust is sated, they happily seek out the company of others to boast about the things they have learned, or to let others bask in their excellence of knowledge. A Zikiel is vain, vain in the knowledge they have acquired, and vain in the fact that others might seek them out to learn a sliver of what they know.

Common Abilities are mechanics that all Zikiel Vampires have access to, meaning they are implied and it is not necessary to record them on a Character Application, though you may for posterity sake. Important instructions for Character Apps are included in the Vampire Form table row at the bottom.