Difference between revisions of "Archblood"

Archblood, previously known as Witchblood or Phantasma, is a soul-curse produced by Dragons many millennia ago to aid them in their fight against the Void Invasions. Archblood were the foot soldiers of the Dragons who fought against the hordes of Demons with their enhanced Void and Exist fighting abilities, and usually formed ranks under a Dragon Knight as their commander to fight even on the battlefield. Much of the history of Witchblood was recently shrouded in mystery, as after the Immortal War, Witchbloods effectively disappeared from the global playing field, as they could only be created by Dragons, and Dragons had all gone extinct. With the resurfacing of the Imperial and Dread Dragon however, Witchblood started increasing in number, and more and more information was brought forward about them. Notably instrumental to their widespread acceptance and integration into the Regalian Empire was Leufred du Briërust, a noble Witchblood who became the champion of his kind, not only laying bare many of the mysteries surrounding Dragon lore, but also putting to good use the skills of Witchblood to fight the impure enemies of Unionism. When the Conduit connected the final Leyline installation to the World Network, all Witchblood experienced an event called the Uplifting, where they transitioned from the broken state of Witchblood, to the more complete state of Archblood, like they had originally been intended, as Dragon power extended itself onto Regalia. 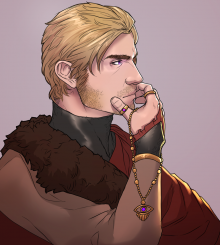 It is rare but some nobles have become Archbloods. Leufred du Brierüst is foremost among these individuals, and has often been a strange position within society as a result.

Archblood infections can occur one of three ways. Specific Dragon Temples scattered across the Archipelago have a good chance to guarantee a person turning into an Archblood. These Temples are equipped with ritualistic sacrificial chambers, empowered by Dragon Wards to succeed in uplifting the soul to Archblood status. Another way to produce Archblood is through the Blue Crown Dragon Soultouch. Dragons are capable of creating Archblood without killing the host. Finally, any person who dies around the world can become an Archblood, however the odds of becoming an Archblood are 1 in 3000 this way. For the first and last method, the person who is being made Archblood is clinically dead for several minutes before, through some unexplained means, their soul is snapped back into their body albeit changed. Some Scholars have theorized that this actually classifies Archblood as Undead, and this is partially also true. Contact with Dragon Soulcores and other research has pointed out that the Dragons always considered Archblood indebted to them, for giving them another chance at life after death in service of the Immortal War and to fight the Void Invasions.

The change to Archblood is effectively instant, with their eyes turning a glowing violet. They will receive visions of how to use their abilities in the form of dreams over the following days, where they will become acquainted with their purpose to the Dragons also. Archblood is not contagious, and those who are infected with it remain fully functional and mortal also, though there is some implication based on archeology that Archblood actually do not age, and instead when they grow old become mindless husks that protect Dragon Temples as silent guardians. This has led Scholars to believe that Archblood (or Witchblood) is a temporary infection, sort of like borrowing time from death to live out a life as if death had never come for them, but eventually it would claim them to become the silent protectors of their legacy. Archblood infection is not curable in any way. There are certain people with Abilities to temporarily suspend the Archblood change on someone's soul, but it cannot be permanently undone. One must not be a Touched Aberrant and higher (excluding Primal Abberants) at the time of death to have a chance at becoming an Archblood. Altalar Archbloods additionally lose access to their Will spells. Only Ailor and Nelfin (except for Sihndar and Kathar) can become Archblood.