The Mouse is a common Aloria mammal which has existed across the world for millennia. Over time, its subspecies have developed unique physical adaptations, from a flaming tail to a long and bushy one. Through all of this, though, the Mouse’s mentality has remained the same. It is a skittish animal, though three of its five subspecies are open to domestication. The animal is best known as a pest alongside its larger cousin, the Rat, due to its penchant to eat vegetation, stored grains, or pantry foods, though it is also well known as a cute but short-lived pet.

The Mouse is a widespread animal whose history across Aloria is virtually impossible to track. They were ubiquitous by the end of the Fourth Void Invasion and existed in the societies of the early Qadir, Altalar, and Ailor on their respective continents. Over millennia, it seems these animals had adapted to a wide range of terrains and environments, some unique to one region while others were far more common. It was the Altalar who first categorized all of the various species of Mice in Aloria, aided by the Drovv, who completed their records with the addition of Jorrhildr's unique species of Candle Mouse. In the many generations since then, the Mouse has remained a part of life for many in the world. For some, they are cute pets, kept out of the reach of Domesticated Tabbies and other predators with a stern swat. To others, they are a pest, gorging themselves on grain aboard ships or in storehouses or nibbling away at thatch roofing, letting the rain into many humble abodes. In other cases, they exist instead in the wild away from all civilization, living short lives as prey animals in the world food chain. Despite all these factors, the Mouse and its many subspecies will remain a constant and continuous presence in the world. 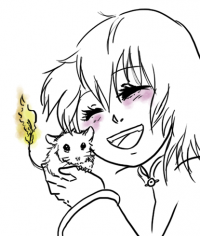 The Candle Mouse is the most exotic variety of Mouse is Aloria, with many curious features.

The Mouse has some of the most extreme physical differences of Aloria’s animal species. However, some general statements can be made about their body which is true for most, if not all, subspecies. They range in length from six inches to a foot long, including the tail, weigh less than a pound and never exceed four inches in height at their highest point when laid flat. Their heads have a narrow snout ending in a small nose with whiskers. Two eyes of varying colors sit on each side of their head and they have a pair of rounded ears above that. Their bodies are small, supported by a set of four paws, and bear a thin, hair-lacking tail. Their bodies are then covered in a thin layer of hair which can vary in color.

As mentioned above, the Mouse is an extremely diverse animal. In its spread across Aloria, a wide variety of subspecies have emerged on the various continents to suit a variety of different needs. In general, their population numbers are equal between the two sexes and there is also no sexual dimorphism between males and females. Below can be found a listing of the various subspecies of Mouse in Aloria.

The Mouse is an animal born in a small den, whether in an attic corner or in some small hole in the forest. It can have as many as ten other siblings, and all grow rapidly from pink hairless babies into miniature versions of their parents by the end of the first month. From there, they continue to rapidly mature, growing to full adult size by the age of three months, at which time they either leave the nest permanently or remain to attract and pursuing mates to attach to the nest. They live rather short lives due to the high predation they suffer from at the hands of a variety of larger animals - their average lifespan is one to two years. Contrary to this, the Candle Mouse lives a staggering ten years, kept alive longer by their active flame which tends to ward off predators.

The Mouse is a skittery and generally energetic small mammal which lives a very active life. They constantly seek out food in the form of plant matter (and in the case of the Longtail subspecies, insects) to feed themselves and their children. Relations between different species of Mouse are often drastic. The most notable relations are that the Field Mouse is more aggressive and dominant than their smaller counterparts, that none of the other subspecies approaches the Candle Mouse unless introduced to one from a young age, and that the Longtail Mouse is the most friendly, using their tails to brush the fur as a cleaning gesture to those they encounter. All subspecies are caring toward their young and have closely knit families due to their tendency to group up in nests. In the case of the Candle Mouse, this process is a bit difficult as too many flaming tails can attract attention or set fire to stores of food reserved for later. All of the others simply add to their nests over time, occasionally creating substantial communities especially out in forests and natural areas away from vigilant homeowners. Of the species, only the Candle Mouse, House Mouse, and Longtail Mouse show any ability to be domesticated. The House Mouse is the most often domesticated, followed by its two cousins in popularity.

The Mouse lives in nests of anywhere from three to fifty individuals and the larger nests exist mostly in trees away from urban areas, on the edges of farmland, or in underground tunnels. The Mouse is not territorial, though it will fight rather adorable conflicts with other members of its species should someone try to steal a favored sleeping spot or attempt to sleep with their chosen mate (males are often the ones doing the fighting).