The fierce and barbaric race of the Orcs are renowned and often feared for their warlike and aggressive nature. Originating from the yet uncharted continent Guldar, a hostile continent with great beasts and hostile poisonous plants that lies far to the west of Daendroc. Orcs can be found far and wide between Regalia and Daendroc, either living in their own tribes or integrating with Human societies, prized for their resilience in battle. Present day, Orcs are poised to replace the Elves as dominant power in Daendroc, recently allied to the Humans and sending back clans to their lost homeland to reclaim the mysterious jungles of Guldar and Sundar.

Orcs are well known for being large and intimidating, particularly in their masculine appearance, even among the women. They are also famous for their green skins. Their proportions are often grotesque, their physique developing a large musculature without any apparent physical exercise. Orcs have many additional internal organs; they have two hearts, one lesser and one greater. They have three lungs, a larger bladder, and a liver with special antivenom organs that purifies their blood of most basic toxins. Additionally, their throat produces enzymes that can paralyze the stomach, preventing them from vomiting. Their entire body is effectively built to consume non edible materials and still get nutrition from them, and to help them survive in the harshest wilderness and fight the most ferocious beasts on Aloria. Male and Female Orcs look little different from each other. Their facial bones are large and pronounced, with tusks on their lower jaw that often stick out, and they have small noses and little head hair. Females are set apart by their relatively small breasts and somewhat slimmer appearance, though not by much. Their hair is also always black, their eye-whites are a very dark shade of Gray and their irisses are always yellow or orange.

Orcs are generally seen as dumb by the other races, and with good reason. Their general intelligence isn’t spectacularly bad, but their insight and sense for logic are often lacking. They have little regard for self preservation and often have difficulty with grammar as complex as that in languages such as common. They will always speak like a child, often in third person, due to the lack of understanding how other languages work. Orcs are often very target and purpose driven, ignoring new information or changing circumstances to rush through to what they want. Orcs often pay little attention to fine methods of communication or more complex social behaviors, preferring to simply say outright what they want in as little words as possible. Orcs are often frightful of magic, resulting in the vast majority of them shying away from it. It is extremely rare to see an Orc mage, and in many cases, they will simply stick to forms of magic which they do not consider magic but common sense, like Beast magic and Lyre magic. 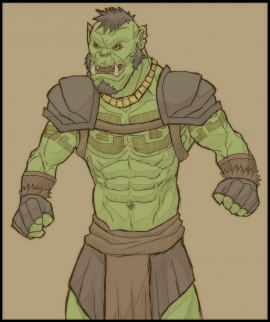 Orc history is difficult to pin down as Orcs do not generally record history. The Orc race does not have a system of writing, nor do they have the desire to write down their past experiences. What little is known about Orc history comes from either the Elves or oral history preserved through tribal stories. It is said the Orcs originally sailed from Guldar and Sundar, the twin isles to the west of Daendroc,when the land itself became poisoned during the time of the cataclysm. It is not entirely clear to scholars what this meant, as Orcs generally have a resistance to poisons.

Orcs arrived in Daendroc shortly after the Void invasion ended, coinciding with the fall of the Elven Empire, which they sped up. The Elves had already descended into fratricidal civil war for several years, though the Orcs put an end to it all when they slew the Elven princes and eradicated the Elven army which was already weary from both the Void Invasion and the Elven Civil War. The Orcs then continued to massacre millions of Elves, which eventually culminated in an event they call the “Big Boom” in which they blew up the Elven capital of Rië, a city that had stood for thousands of years, with a number of bombs large enough to destroy nearly 1000 square miles of land..

After the destruction of the Elven Empire, the Orcs themselves descended into chaos and infighting as they fought to control the land they invaded. War leaders broke off from the central invasion force and tried to land a claim to what they had destroyed. The Orcs were originally pushed back when the Regalians and other Ailors allied with the Elves to drive off the Orcs, but that all changed in the year 302 AC when the Regalians betrayed the Elves, attacked them together with the Orcs, and eradicated the last Elven Kingdoms in Daendroc itself. Present day the Orcs live mostly in the Dark Iron and Forging Blood tribes in Daendroc, as well as integrating to Human societies. Humans in particular strongly favor Orcs as shock troops, as well as for unofficial slave labor in the mines and quarries of the Empire. 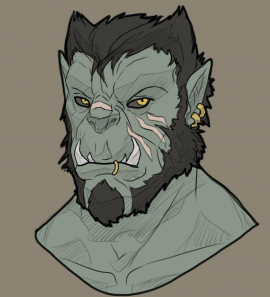 Some Orcs are hairier than others, but never have eyebrows

Orc society is very unstable and ever-shifting due to the way the tribes work internally, as well as externally. The Orcs integrating into Human societies often also form enclaves, living in certain areas of Human settlements together clumped in one area. Orc society is strongly dictated by their religion as well as their philosophical views of life. Despite the ever changing nature of Orc society, in its geographical location, political structure, and internal functioning, very little about Orc culture actually changes, and the race itself is fairly stagnant.

Orc politics are true to their race’s reputation—brutal and fair, at least to the Orcs. Orcs are divided into larger tribes, which all have smaller tribes called Maala. Maala’s are often a single strong Orc and that Orc’s harem, as well as a series of independent warriors that have no family relation to the lead Orc and wives of their own. The lead Orc is seen as the Maala-Margulan, or the leader of the Maala (usually shortened to just “Malgul”. A Maala can loosely be interpreted as a tribe, though it is never permanent and often relies heavily on the prestige and strength of the lead Orc. A strong leading Maala-Margulan who commands much respect may have hundreds of Orcs following him, or very few. Orcs often switch between Maala-Margulan when they find one that is more respected. Succession in the Maala is often decided by the strongest child of the lead Orc when they die, though not always guaranteed as the chaotic nature of tribal succession often causes other strong Orcs to make a grab for power. This sometimes causes as much as half the Maala to die during a succession crisis.

Orc culture, despite the assumptions and prejudice of the other races, is much less brutal internally than it is externally. Save for the lead Orc of a Maala, the warrior Orcs are often strictly dedicated to a single brood mother, or wife (though they may stray from their vows when plundering). Parentage is often strong in Orc culture, as fathers take good care of their children up to the point where they can fend for themselves and there is little distinguishment between gender in that regard. Orcs don’t have a formal sense of fashion though, they often dress themselves in the furs, skins, and teeth of whatever they slew. In some macabre Dark Iron tribes, this includes the flayed skins of the Elves and Humans they may have killed. Orc diet almost completely consists of raw meat, with some fruits every now and then. Despite not producing their own ale, Orcs have grown fond of Human ales and frequently barter combat and labor for drinks.

Orc religion is very central to their existence and philosophy in life. The central deity in life for the Orcs is Vakgar, accompanied by the hunting terror bird Yazgar. In the religious beliefs of the Orcs, Vakgar is hunted his entire life by Yazgar, the hunting bird as large as a mountain that eats Orc hearts. Orcs believe they must fight to bring glory to Vakgar, thus lending their strength to Vakgar, which will allow him to outsmart or defeat the terror bird in combat. Orcs also believe that if they do not engage in this act of borrowing their power, Vakgar will be killed and his hearts will be eaten, resulting in the end for the Orc race. Despite the fact that Yazgar is depicted as a terror bird that brings about apocalypse to the Orcs, she is also revered as a symbol for fertility, wealth and the future generations. It is said Yazgar hunts Vakgar because Orc hearts are the only food its children will eat to survive. This creates a complex system of hunter and prey, the roles being not always obvious and often reversing depending on the situation. It results in Orcs generally being bloodthirsty for battle, and more notably, consuming the hearts of their own dead. Either fallen in battle, killed by disease, or old age, Orc hearts are consumed by the tribe to bring appeasement to Yazgar. 270px|thumb|right|Female Orcs can often not be told apart from males

Orcs often function as the shock troops of many Human armies, particularly those of Regalia. Orcs find much employ in mercenary armies, as Humans often rely on them to soften up the enemy and limit the casualties of their own, a practice that has made some Orc mercenary companies quite famous and immensely rich. Orcs often rely on blunt or crushing force. Large weapons like axes, clubs, and hammers are frequent favorites. Orcs also use little to no armor, neither fearing death nor injury due to their body’s natural resistance to it. Orcs don’t formally wage war on anyone, instead they simply raid whomever or whatever they feel they can raid, in some cases even their allies. Yet still, their alliances persist, as it would be worse to be their enemies.

Orc Economy doesn’t formally exist. An Orc owns as much as he carries on him, and he holds no value for what he cannot carry with him. What little barter Orcs do often relies on their physical labor of fighting in exchange for fleeting goods such as finer foods, ales, and in some cases, the comfort of women. Due to the relative lack of understanding of the concept of ownership among Orcs, technological progress is fairly nonexistent. Orcs by all means still live in the tribal stages that the Humans once were in before they formed complex aristocratic societies based on bureaucracy.