Owls have long been a feature of Cultures and Races across Aloria, with many points of reference and appearance over the years. The most well known is the relation Owls have hadwith the Velheim people of Aloria. Within their terrain, three types of the bird have flourished: the White Owl, Brown Owl, and Throatcapswald War Owl. Over time, each came to represent different aspects and connections to a variety of deities that have remained today such as wisdom, winter, and hunting,given the traits of each animal. In addition, more well known (though largely only for the oddness of them) are Owls in Sihai Culture. It is said that Owls were once far more common in distant Dexai, but when the Loong Dragons birthed the Greater Dynasty, they plucked the Owls’ feathers and imparted them onto the Sihai people to cloth those who wished to be of the Greater Dynasty. As for actual Owls, the exotic Dark-Eyed Owl native to Dexai has become a symbol of the Greater Dynasty, even if the two do not look exactly similar visually speaking. Finally, it should be noted the total lack of Owls within Altalar society. This has confused some, considering the ancient history of the Altalar and the Allorn Empire, but most point out that despite being such an old people, Daen lacks species of Owl, as do most of the regions around the continent that the Altalar visited most often. Today Owls retain a connotation with intelligence, especially with those who know of the Sihai. But for Velheim and similarl pagan Cultures, they often have much more meaning behind them. 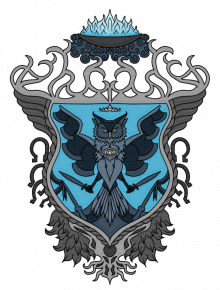