Phantasma, more commonly known as the Witchblood Curse, or its more advanced stage Hallowblood, is a mysterious blood-curse that shares many similarities with the infamous Sanguine Curse, but is far less widespread and known of. For many centuries, Witchblood concentrated itself purely in Ellador and Daendroc, before the increase in travel and legalization of Magic attracted those with Witchblood to the Regalian Empire. The recent resurfacing of Feathered Dragons has led to Witchbloods being created inside the City of Regalia, creating the implication that Witchbloods are somehow tied to Dragons. Phantasma have a peculiar urge to consume the soul essence of mages or Silven, or indeed any other being connected to the Void or Exist—even Aleia. They consume the soul essence of their targets, granting them satiation based on the subjects they have successfully drained, who are left lethargic and often unable to use their own abilities as a result. Furthermore, the great religions of the world have managed to experiment with Witchbloods, causing Blood Curse Mutations that allow for the creation of specific abilities, restyling the Witchblood into so called Hallowblood, Holy Warriors.

Phantasma occurs in only one way, though the manner in which it occurs is not known to scholars. Those who have a near-death experience (or in some cases are considered clinically dead), have a random chance to become a Witchblood. The exact process by which this occurs is unknown, which is furthermore complicated by the fact that nobody knows where Phantasma comes from, or who first contracted it, or if it is even contagious. The blood curse itself doesn’t start showing symptoms until a week after the near-death experience. The first of these is a constant, dull ringing in the head. This is usually misdiagnosed as imbalance of the humors or headaches, and subsides after a few days. The next symptom that occurs is a phenomenon known as greensight, followed by a state of jarring confusion. Everything they look at will appear ever so slightly more green, almost as if a green filter has been placed over their vision. Meanwhile, the infected will become more disoriented and confused about what is going on, who they are, where they are, or what they were doing. At this stage they usually do not seek medical aid (unless forced to by others) and even when assistance is sought, these symptoms are not curable or diagnosable as anything but insanity.

In the final stage of their transformation, the Phantasma gains a strange and unexplainable urge to strangle any individual with a Void or Exist connection—notably Mages or Silven. The first target a Witchblood seeks out is almost automatic; they are able to sense a nearby Mage or Silven, and will proceed to strangle the one closest to them. While in the process of this strangulation the Witchblood curse will fully activate, and they will instinctively learn how to feed in the future without the need to strangle their victim. They will additionally lose the ability to implicitly track Mages and Silven, but will retain the ability to sense the vague existence of one of their prey in the radius of a few dozen feet. The entire infection process takes a week to commence, and a week to fully take hold; after that week, it can take anywhere between a single day or three days for a Witchblood to find their first feeding.

Witchblood infections can only occur in Ailor and Elves (except Kathar and Drowdar), and but cannot occur among Mages, Vampires, Vilitatei, Aleia, or Silven. Furthermore, a single first feeding is required for a Witchblood to be able to become a Hallowblood.

In a similar manner to Vampires who must consume blood to stay healthy, Witchbloods feed on the soul essence of Mages, Silven, Vilitatei, and Aleia through a process initiated by touch. In order to feed, the Witchblood grasps onto the individual (which weakens their ability to resist), before their irises turn bright lime-green. In addition, lightning-like patterns of light fan out from their hands up their forearms. As long as the Phantasma has firm grip with both of their arms on the target, the victim will become weaker, unable to resist the ritual. The feeding itself takes about thirty seconds, after which the victim will pass out and the Witchblood experiences a rush of adrenaline. Feeding is not lethal for the subject; while the Witchblood feeds on their soul essence, they do not suffer any permanent damage. Without frequent feeding, a Witchblood—much like a Vampire—becomes weaker and drained of energy. A Witchblood needs to feed at least once a week in order to remain healthy. They lose about 25% of their body strength for every week they go unfed in a row. They become frail and incapable of fighting after the 4th week. Unlike Vampires however, Witchblood still need to consume food and drink as mundane Alorians do to keep their body sustained. While Witchblood is a blood curse that alters the host mentally, it doesn’t affect their physical appearance in any way aside from the change to their eye color. Once satiated, a Witchblood’s irises will remain lime-green and continue to give off a faint glow while they remain in a fed state. The satiation of Witchblood will last roughly a week.

Hallowblood is a state that Witchblood can acquire when they undergo the trials of faith among their respective religious organizations. There are three major religious organizations, the Estel Grove Council which is led by the Ringverate of Estel, the Synod of Unionism led by the High Reverend, and the Fayth & Gods Collective led by the Old Wizer. These organizations must (IC) agree on a vote to induct a Witchblood into becoming a Hallowblood under their faith. It is necessary for such a Witchblood to be zealous or devout to their respective faith. The individual organizations will measure the willingness for the Witchblood to die for their holy mission & cause, and will reject those who they think have doubts or question the faith. When approved, the character undergoes an acclimation process where their body is accustomed to the Hallowblood Substance, a material they must consume every third day to stay Hallowblood. This process takes a single day, and is quite painful, but when the process is over, the Hallowblood lose their green eyes and Witchblood abilities, and gain their first Hallowblood ability instantly.

Every other ability is gained in no specific order (and may in fact be completely skipped or ignored), each ability requiring a specific religious mission and a test of power, skill and wit that unlocks the next mutation in their Hallowblood Curse (or Blessing depending on how you see it) by pushing themselves to the limit. The vast majority of these religious missions can only be performed by Progression Missions, which are explained below, and have a chance of failing. When completing all Blessings in the same Faith category, the individual is truly named the champion of their faith, though they must always remain within good graces with their religious leaders, and their faith must not falter, as failing their faith results in the cut-off from the substance supply and reversion to regular Witchblood. Reversion can be undone by consuming new substances, but obviously only when their religious leaders allow it. In order to be voted into Hallowblood, a majority of votes on the individual religious organizations is required, but in order to excommunicate a Hallowblood from their substance supply, only the leader of the organization is required (though the organization may also vote for it). Below follows a chart with the Hallowblood Mutations.

Hallowblood have no visual traits or characteristics that make them distinguishable from non Hallowblood, or indeed any normal humanoid. However, when Hallowblood use their abilities (unless they are passive abilities) and when looked at by others, they have a sort of glowing halo of light around their head, called the Holy Halo. For Unionists, this Halo is yellow like the sun. For Oldt Gods, this halo is green but far less pronounced, barely even visible. Instead, what is visible is tendril/vine/root like tattoos on their arms that shine light when using their abilities and disappear when they stop. For the Estel Faith, this halo is light purple, a glow of color that also radiates from their eyes which are colored solid light purple when using their abilities. It is necessary to amend the Character Application of a Witchblood Character with "Hallowblood" status, as well as each Blessing earned each time one is earned under the Proficiency Points. 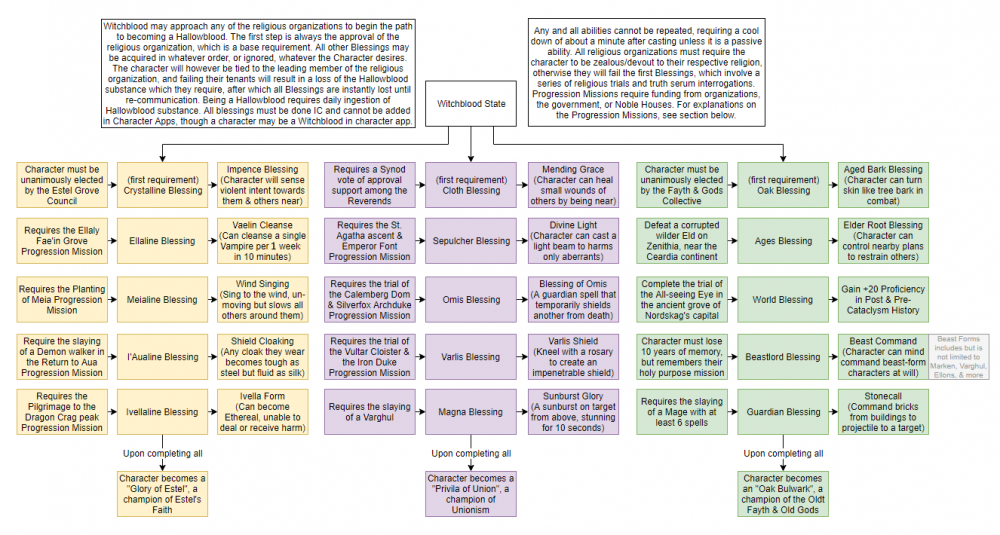 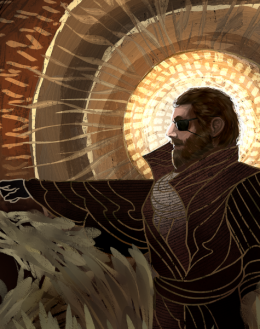 An artistic rendering of the Light Halo around a Hallowblood's head when using any of their use-abilities. The real halo is not this dramatic, but certainly visible even through headwear or cloth & armor. This is called the Holy Halo, which is more frequently depicted on individuals who aren't Hollowblood to signify their devotion to their faith.

Progression Missions can only be performed through so called Player Progression Orders, and have to be specified by: Gangs, Nobles or organizations which have financial means, for example the Synod or the State Council. Each mission costs 10,000 Regals by default, and more may be spent to increase chances by the Order makers. Each mission has a specific description of what is required, and what can be done to increase chances.

In any and all circumstances, the Noble family owner / Government person / Organization lead must submit the Progression Order, NOT the Hallowblood in question. It is thus necessary to communicate both IC and OOC on how to proceed with this, what the plan is given the trials that are to be faced, and how to bring this mission to a success. Orders are to be filed at This Page. Remember that Orders can fail, and can cause wounds on characters that will last for upwards to a week. Maim and kill perms are never granted in such progression orders.

There is currently no known cure for Witchblood, while denying a Hallowblood their substances will simply turn them into a Witchblood. A specific Mutation of Vampire can also feed on both, denying them their abilities for a week, though neither will be cured from this feeding. There is also no known way of limiting or otherwise decreasing the negative effects caused by underfeeding aside from effectively comatosing someone with Witchblood. It is not possible to effectively hide Witchblood eyes with tinted glasses, most notably because Witchblood eyes glow, and are thus visible behind most glasses or even hoods unless they are pulled all the way over the face, similarly, Hallowblood glow is also not hideable as it shines through clothing.

Witchblood have a curious relationship with the Regalian Government. Much like Vampires or Vilitatei, Witchblood are considered aberrants and illegal. To be Witchblood-infected is to be hunted—perhaps not to the extent of Vampirism, but certainly to the extent of ridicule and exclusion or discrimination. As such, most Witchbloods hide their identity and live in the slums, feeding off the aberrant populations. Some choose to report themselves to the Regalian Government and enlist among certain organizations to assist in the hunting of Mages or the capture of Silven due to their natural ability to weaken both. Others yet that have devotion and zeal for their religion seek guidance and solace from the holy men that administer their faith. Witchblood that show their glowing green eyes are almost always reviled, and are commonly mistaken for demonically-possessed individuals, notably because the very existence of Witchblood is not common knowledge. The first reaction any Regalian citizen has to seeing someone with glowing green eyes is to call for the guard and the inquisition. In stark contrast, Hallowblood are revered as holy protectors and warriors of their faiths. The common population does not know that Hallowblood come from Witchbloods.