Difference between revisions of "School of Seminary"

With a body as large as the Unionist Church, there is a need for men specialized in the religious arts to handle the administration of the faithful and to interpret the will of the Imperial Spirit. The School of Seminary is a theological school that focuses on the teachings of Unionist theology and serves as the primary institution for clerical learning in the Regalian Empire. It finds its origin in the church reforms of Blessed Emperor Henri III and all clergymen who hold rank in the church are required to attend the school. The school teaches aspiring priests the history of the Unionist Church, the rites and rituals of the clergy, and other skills necessary to lead the faithful masses. While the burden of the cloth can be filled with many sacrifices, those who enter into the leadership of the Unionist clergy can expect to hold influence over the people, much to the desire (or disdain) of the secular nobility.

The School of Seminary was formally established during the reign of Blessed Emperor Henri III, who saw fit to reform the decentralized and ineffective Sancella of Union based on the structuring of the church body. The creation of the school, and the more clearly defined hierarchy of the Sancella as a whole, led to a more uniform doctrine of Unionism, as it was mandated all prospective Curates would be required to attend the school before entering ranks of the Sancella. The central academy of theological learning in the Empire would remain in the City of Regalia until the year 211 AC, after which a shift of focus by the Sancella resulted in the establishment of the Allamariën-Hauptseminar in the City of Calemberg, much to the dismay of a number of more outspoken Curates and Reverends from southern and western regions of the Regalian Empire.

The Seminary remained unchanged for most of its lifetime, though recent events around Unionism has proven a current challenge for the school. While the Dragon Crisis saw a short-lived sect of Unionism which worshipped the Imperial Dragon of Cedromar I, the greater impact came from attempts to mend the Schisms between all sects of Unionism, an action which lasted for only mere months before the Unionist body splintered once again. Finally, the revelation of the Tenth Creed and the establishment of the Immovable Concepts solidified the necessity for the Seminary to continue to instruct future men of the cloth. While individual church bodies form around the Regalian Archipelago and abroad, only time will tell if the School of Seminary will continue to be a universal standard of religious instruction, or fragment to suit the needs of the various bodies of the Unionist collective. 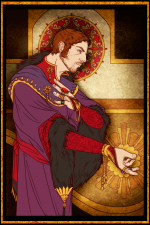 Reverends naturally have a strong influence over the minds of the Unionist faithful and are implicitly trusted by most.

Entry into the School of Seminary is free of charge, provided certain prerequisites are met; the prospect must be an Ailor man, and can qualify via several tedious entrance exams. Those who fail can, however, buy their way into the ranks of the Church if they are of an incredibly affluent background. A unique feature of this school compared to others is that age is not a requirement. Generally speaking, most students enter the seminary around the age of ten, which is considered to be the typical route for clerical training. However, older men such as ex-knights may attend seminary later in life, becoming too old for their original craft or seeking a new calling in life. Regardless of age, seminary is very strict in its doctrine, and any individual who leaves the seminary is forbidden from entering the Church’s ranks again. Often those who leave and desire to return enter into monastic living, spending the rest of their lives in service to the Spirit for their perceived betrayal to a holy calling.

The School of Sancella teaches its students to be the proverbial shepherds of the flock, educating the people in religious doctrine and how to live dedicated to the Spirit. Consequently, the school stresses the importance of setting an example; as Reverends naturally hold much sway over the people they preach over, many of whom do not know how to read the religious texts for themselves. After graduating, students are given the rank of Curate and are sent to a small chapel in the Empire, or to a Reverend in a cathedral where they carry out their religious duties.

Education is split into four quarters, taking around six to eight years to complete. The first years are spent in learning the virtue of humility, meaning they are forced to handle menial labor around the seminary their tutors would rather not dirty their hands with, while also rooting out the weak-willed. The second quarter’s focus is on the study of the Ten Creeds, their many interpretations, and how they apply to the day-to-day life of a pious Unionist. The third quarter continues in the study of theology while outlining the various Sacraments of Union and Unionist Sanktism (if they desire), preparing students so they may carry out these holy rites after graduation. The fourth and final quarter is heavily involved in sermon-crafting, the ability to rouse the masses and deliver compelling speeches to the flock of Unionism. During this period, a student will usually begin to form their own interpretations of the Creeds, which can later be used to proselytize the faith. After all this, a pilgrimage is made to one of the holy sites of Unionism before the student graduates as a Curate.

OOC Rules for the School 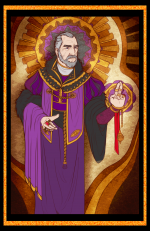 Some Reverends may be promoted by the Emperor instead of the formal structure of the Unionist church, like former Supreme Reverend Aethelred Howlester (pictured above).