Fostered by nature, the Yanar are a Race of plant-like humanoids once called the heralds of Estel, now having to create a destiny of their own as Estel has gone silent to them. Yanar do not have a true state or society to call their own, but have seamlessly integrated into other Race structures across the world, finding purposes as wide as harmless tree-huggers, mercenary warriors, nature craftsmen and religious preachers. Wielding their relatively innocent and harmless appearance as both charm and weapon, the Yanar remain one of the most underestimated Races in the world. Bringing a strong sense of community and communal living with other Races in balance, the Yanar are well known to always have a friend somewhere, and that they will always overcome anyone who dares to underestimate them in any way.

It is difficult to apply a single core identity or aspects to the Yanar, due to their race being so diverse in their appeal and application around the world. Yanar are capable of being and imitating practically any Race, with on-command and on-will personality changes, physical transformations, and applications of their skills. The Yanar truly are the jack-of-all trade Race, more so than Ailor even, due to their flexibility to focus on many different kinds of pursuits in life.

The Origins of the Yanar are still barely understood, there remains a lot of debate in scholarly circles whether or not Yanar are created by a divine entity, whether they were designed by Exist Forces, or whether they came about through some other unknown manner. Much of their appearance during the most chaotic periods of the collapse of the Allorn Empire left whatever research and records were made of their appearance in ruin in the aftermath. Though the Yanar also seem particularly unbothered by this, while other Races with mysterious pasts keep trying to reveal them, the Yanar are more than content to let others do this, and focus on their future.

Regardless of the disposition of the Yanar, the connection between Yanar and nature is unmistakable, and more-so undeniable. Even Yanar who engage in Engineering or Magic keep the theme of nature alive in their work and activities, whether it is something as simple as plant-like patterns in Metallurgy, or a fusion of living wood and technological design. Whenever any issue arises with nature, the Yanar are the first to the scene, and the last to leave, with intricate knowledge and a deeper understanding of plant life that no Race can compare with.

While the Nelfin Races are incredibly divided, from the religious opposition between the Estellon Teledden and the Void Worship Kathar, to the war-like Maquixtl on land, and the sea-borne Fin'ullen. The one thing that unifies them all, is the Yanar, who act like peaceful mediators between all of them. Despite the violent opposition between the Nelfin races, Yanar are always able to safely and skillfully move between the subgroups without being blamed or accused of being complicit. The Yanar are universally well liked by all Nelfin Races. 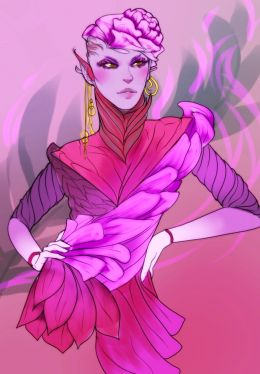 Yanar have a very flexible physical appearance, because of their natural ability to Floral-shift into the appearance of other Races, though many of them are by default Floral-shifted to Teledden or Maquixtl. This means that their proportions are similar to these Races, with pointed ears, though every part of their body is made out of plant and flower matter, and some even have bark-skin. Their hair can be made out of vines or flowers or both, metals and leaves adorning their limbs, with a great deal of color and hue variance. Yanar may sample after other Races, so for example, a Yanar may choose to appear like an Eronidas, but have wooden tusks and cactus-like skin, or they might appear like an Isldar, but instead of white hair, they have white orchid petals for hair and light blue skin. The Race is agender, though through other cultures, Yanar can learn what gender means and adopt one, causing physical changes in line with an identity. The Yanar don’t have a personality guideline, because of how flexible they are. The next sections will discuss why this is the case.

Yanar, while a-gender, lack conventional reproduction organs with which to reproduce, but that does not mean that their Race is incapable of increasing their numbers. While other Races usually have to copulate to reproduce, the Yanar are able to employ a form of self-division, by grafting a piece of themselves onto a tree, causing it to grow a Yanar Growthling pod. This pod grows over the course of a month to birth a fully grown adult clone of the original Yanar, personality and all. However, as time goes by (and through the use of Floral-shifting) the Yanar change their appearance and personality, to the point that they become two distinctly different people, though retain a family-like bond.

Yanar are capable of ‘Wildbirthing,’ or resetting their growth, as Yanar are naturally ageless. When a Yanar chooses to die, they may envelop themselves with a cocoon, which revives them after a day’s wait. In this process, the Yanar can choose to change their appearance, personality, and wipe all of their memories to the point they are functionally a different person. The only thing that must always stay is their connection to people. Even if they do not remember why, a Yanar will always like or dislike the same people across their incarnations and seek to be close to the ones they were before. Despite being Ageless, Yanar can die if they are killed by an external force like an accident or violence, being unable to become Undead. It is important to note, however, that both Wildbirth and any "Shapeshifting" mechanics that Yanar have, for balancing reasons, do not function as Disguise mechanics or prevent the Yanar from being recognized as who they were prior.

Yanar Graftbirth is how Half-Yanar are created. A Yanar may sample material from their non-Yanar lover and graft it to a tree much like normal Yanar reproduction, which in a month’s time creates a fully grown Half-Yanar. Half-Yanar share all Yanar abilities and design, but are aesthetically different. They appear like a fusion between the Race of their non-Yanar parent mixed with flowers and plants, always part of them, but never all of them. Visual aesthetics of the non-Yanar parent’s race must remain, especially skin-tone and eye color. Additionally, they can only Floral-Shift their Yanar parts, meaning they always resemble their non-Yanar Race.

Racial Abilities are generally a set of unique powers and effects that all peoples of that Race all innately have, while Specials are more passive, aesthetic focused capabilities. Specials are defined per-page, while Abilities can be searched on the Ability List page to determine their generic function. Yanar have only Specials themed around plants, nature, cottagecore and the changing of the seasons. Half-Yanar have access to all the same Specials, with one small change, in that Floral-Shift does not allow them to change Racial appearance, though they can change anything else.

The Yanar do not really have a culture. Rather than creating societies that are entirely stand-alone, Yanar join other societies to the point that they make up a sizable part of them. Common groups that Yanar join up with are Maquixtl, Teledden, Kathar, Solvaan, Sihndar and (non-wild) Urlan. The only Race Yanar often avoid are the Suvial, because of their love of fire and the inherent danger fire poses to Yanar. Most Yanar exist in an ex-Allorn pro-Nelfin environment, with Estellon worshiping groups being the most common, though Void-harmonious Yanar also exist among the Kathar, who the Kathar are not explicitly hostile to, as Yanar provide entertainment that the Kathar enjoy. Yanar also don’t really have fashion of their own, often adopting the styles of other Nelfin Races and making floral additions, or in fact wearing nothing at all. Due to the fact that most Yanar are agender and lack any sort of reproductive organs or other areas that Ailor might wish to be covered up, Yanar’s own bodies can mimic the appearance of clothing through petals and leaves, and as such clothes may be redundant.

The Yanar do not have a language of their own. Rather, the majority of them speak Altalar or Saan with the vast majority of them also being fluent in Common. Yanar do have a unique naming style. A Yanar has two different names, their first name which is a permanent name, and their surname or second name which changes every time they Wildbirth, into a name that is descriptive of their personality or purpose in life. Yanar names are generally non-gendered, though additional vowels can be added to make them sound more feminine, or more masculine with more consonants.

Surnames (or personality names) are usually more related to what they intend to do that life, or a major streak in their personality. A Yanar with a particularly heated personality might for example have the surname Burnweed, while a Yanar with a particularly peaceful personality might have Tranquilflor as a surname. A Yanar who works in metallurgy might have the surname Barkforger, while a Yanar who works in a pub might be called Dewleafbrewer. Whatever the outcome, some type of nature reference or plant name should always be included.

Finally, it is possible for Yanar to adopt so-called clan names. Clan names are similar to family names, though they are rarely if ever used when referring to a person. While family connections matter, Yanar generally don’t want to be identified by clan affiliations, preferring their own surname. Clan names are usually fairly short and have more to do with the rough area where the Yanar are from, for example: Graymountain, Verdanthill, Pinecove, Coralbed, Stonewald, all names that refer to the rough environment the clan calls home.

By far and large, most Yanar are avid Estellon worshipers, with a particular reverence for Mana, Mother of the Living Soil. That being said, other Gods and Goddesses may equally be worshiped, Estel herself is also considered important, while most other Races leave Estel largely to the sidelines. Even when not faithful, they still have a positive perception of Estel, though none of them can remember why. Due to the habit of Wildbirth, any Yanar who was alive during the days of their first appearance in the Allorn Empire has no memory of these events, so none of them fully understand their role in Estellon or wider history. Still, other Races who worship Estellon consider the Yanar to be messengers and heralds of Estel, as folklore has it that they first appeared when the downfall of the Allorn Empire was all but guaranteed, as the last hope to save the Nelfin. As such, Yanar are often treated as the bearers of warnings and good will, to remind the faithful to stay true to the Gods and not be led astray by vice and corruption.

Yanar organize into clans, with all clans having a single founder, who has sub-divided a number of times to produce several Yanar of varying personalities, occupations, and predispositions. These clans however can also adopt members of different Races, which isn’t the same as a legal contract of adoption, but is more an informal manner of conveying honor and reverence onto a person to accept them as one of their own. Yanar can also be lone wolves, and decide to reject a clan, founding one of their own and severing ties with their previous clan. This isn’t considered a hostile act, after all, Yanar are generally laid back and lack real reason to have conflict unless they specifically go looking for it. There is no such thing as Yanar childhood, as all Yanar are born mentally and physically as adults with a basic understanding of how to do basic things like washing clothes and preparing food. Yanar romance is fairly open to interpretation.