Drowda, sometimes called the Forbidden Continent, is one of the most magical yet simultaneously dangerous lands in Aloria. This island far to the north has been barraged with Void Essence from the Veil for the past 300 years, and is the site of the beginning of the Fifth Void Invasion as well as the Cataclysm. Dotted with hundreds of species of dangerous flora and fauna, the lone Nelfin protectors known as the Drowdar live their entire lives dedicated to holding back the masses of the Void from leaving the continent and wreaking havoc elsewhere in Aloria. Drowda is a place of beginnings and ends—and it is unknown which of the two it is enduring now.

Drowda has a long history dating back centuries before the Cataclysm. Drowda was once occupied by the Drovv, a mythical race with elongated necks who were centered around martial skill. These Drovv became a client state of the Elven Empire around 500 BC, keeping watch over the Arctic continents. In these days, Drowda was relatively similar to Ellador and Fendarfelle, though likeness would soon be nonexistent. This race was glorified by the Cult of Dronnal, a mysterious group of Nelfin that glorified martial skill and prowess in combat. During the Void Invasion, the Drovv people fell and were utterly exterminated by the demonic forces of the Void but not before they warned the Elven Empire of the looming threat of the Void. In a fortunate series of events, the Elves were able to organize a resistance to the Void armies, and successfully fought back. Though they fought bravely, it was not the Nelfin military that would save Aloria.

Years prior to the Void Invasion, the Kathar agents of the Void captured the statue of Estel and moved her to a large cavern in a large mountain in the middle of Drowda. Here, they chained Estel up and used her power to open the Veil to enable the forces of the Void to invade. A small group of around eight adventurers ultimately sacrificed themselves by collapsing the entire mountain on top of them and the statue of Estel, destroying her and thereby halting the Void Invasion. The end of the Fifth Void Invasion was not the only consequence of this action, though. When the Veil closed, all of the demons and Void Essence tried to drain itself back through the window, like water in a sink going through a drain. Unfortunately, this drain was blocked by the destruction of the Veil, resulting in the Void Essences lingering above Drowda.

This hovering Void Essence shaped and tainted the land, turning its flora and fauna all different colors, twisting their sizes and shapes, and changing their abilities and functions beyond recognition. The plantlife either died or mutated into abhorrent and sometimes toxic alterations of themselves, while the animals became hyper-aggressive. Drowda, quite literally, became a massive breeding ground for mutants, monsters, and other horrible things.

The Protectors of Drowda

With the disintegration of the Elven Empire, as well as the apparent loss of the Drovv, the Cult of Dronnal ventured north on a crusade to try to liberate any imprisoned or trapped Drovv who might be remaining. Unfortunately, all they found was a graveyard littered with monstrosities. Finding no Drovv left to help fight the terrible forces of Drowda, the Cult of Dronnal took up the mantel and began clearing out the old strongholds around the coasts of Drowda. As these Nelfin warriors liberated the citadels one by one, they found their skins turn tyrian purple and their hair white as snow. Taking up the name of Drowdar, these warriors took up the mission of ensuring the terrible and horrific monsters that lived on Drowda would never be able to leave the continent. Eventually, the Drowdar established fortresses around the entire continent to ensure the Void mutants could never leave, and have been fighting to strengthen their chokehold ever since.

Today, the Forbidden Continent is closed off from most of the world due to the hostile oceans that surround it. Still, many Drowdar find their way from the continent in search of aid against the forces of the Void. Ailor, other Nelfin, Orcs, and more all flock to join the legendary warriors at the most dangerous continent in Aloria, seeking honor and glory, or for the more selfless and altruistic reasons such as defending the ones they love back home.

Drowda is considered one of the northernmost “civilized” continents in Aloria, as civil as one may call its occupants. The Void-tainted land is separated from Fendarfelle to the west, and Ellador to the east by the Inner Storm Sea, which almost entirely isolates the landmass from the rest of the world. Drowda is within the Arctic regions of Aloria, and can be classified as a tundra with intermittent mountains. Icy rains come from the sea and pelt the continent, which intensifies towards the center due to the distortion of the Veil and excessive amounts of Void Essence.

Drowda is a rugged land, and its ecosystem has simultaneously been flipped on its side, yet reinvigorated by the horrors of the Void. The grass that survives there is grey, black, and sometimes even purple, while the trees are twisted and gnarled. Towards the center of the island are huge mountain ranges that surround Estel’s Grave—the crater where a massive mountain once stood, destroyed by the catalyst for the Cataclysm. This center is, by far, the most affected by the Void, which directly correlates to the amount of dangerous flora and fauna located there. Constant storms of Void Essence rain down on this area, and not even the brave Drowdar dare to venture there. Away from the inner mountains are plains and forests of local flora. The coasts of Drowda are, while still dangerous, not as threatening as the center of the continent. Only the occasional fauna still venture here, mostly due to the presence of the Drowdar Xaster citadels which push them back. There are no formal countries in place on the island; only the citadels which know only one enemy: The Void. 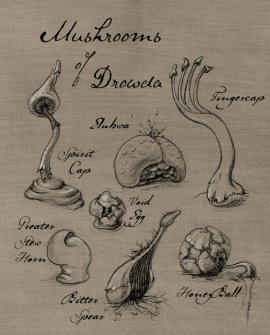 There are many different magical fungi on Drowda, each with their own individual uses.

As mentioned before, the flora of Drowda have all been twisted and mutated into horrifying renditions of themselves. These mutated plants are generally more dangerous closer to the center of the island, as opposed to the mild and passive flora that live towards the coasts. The majority of plant life on Drowda is actually fungi; mushrooms of any size (including those as tall as trees) dot Drowda’s surface. Unique and niche plants, such as the Eluhwa or Honey Ball, make frequent appearances along the coasts and inner plains and forests of Drowda. Some mistakenly think that Dulofall grows and spreads on the Forbidden Continent, though this is only a myth.

The fauna represent the greatest threat to any adventurer exploring Drowda. The beasts here come in all shapes and sizes, but one thing they all share is their Void-induced mutations and madness. All creatures on Drowda are hyper-aggressive and will attack anything sentient they see due to the influence of the Void. A prime example of this is the Giant Drow Spider, an arachnid well-known for its devastating ability to slay Drowdar patrols with ease. Another lesser known creature is the Shssisse, semi-intelligent hunters that wander Aloria and feed off of Void Essence, who have all seemed to gather on Drowda. These beasts, deceptively nick-named “Void Dragons,” are able to control the Void to make themselves blend in with the environment around them, making them exceedingly difficult to detect.

Drowda is predominantly ruled by the Matrial Council, a group of fourteen elderly Drowdar women from each of the fourteen Xasters. This group, led by the figurehead “Queen” of the Drowdar, decide yearly goals and objectives for the Drowdar to work towards. They do not, however, dictate how the individual Xaster keeps are supposed to achieve this goal. One citadel may decide to bide their time and utilize stealth to get the job done, while another may charge right into the fray to clear out a nest of Void-infested creatures. The Drowdar on the continent are not free thinkers, and often blindly obey orders to the death without question.

The Last Bastion is the only port in Drowda that accepts outsiders. Orcs, Dwarves, Ailor, and Nelfin that flock to the Forbidden Continent must stop here before being assigned to assimilate into one of the Xasters. This port also sends Drowdar scouts out into the world to gather supplies, knowledge, technology, and resources from the rest of Aloria in order to ensure the Xaster keeps are well-stocked. Despite being the only port in Drowda, it is not busy at all; a ship comes once or twice a year, and that is only if it manages to survive the Inner Storm Sea. This makes all imports and exports to and from Drowda incredibly rare for the seemingly two different worlds of Drowda and the rest of the Aloria.

The Veil is not necessarily a tangible location but its influence in Aloria’s long history is noteworthy enough to warrant mention. The Veil is a non-physical window into the Void positioned directly in the center of Drowda, directly above the crater known as Estel’s Grave. This Veil is the sieve through which magic flows into the world, considerably justifying why Drowda is as twisted and mutated as it currently is. The Veil has no physical representation and is not able to be seen, but is moreso a metaphysical connection between Aloria and the Void. Mages who cast on Drowda find their powers amplified by hundreds, but are almost certain to be possessed by Voidlings.

Estel’s Grave is the large crater located in the center of Drowda where the statue of Estel was crushed, ushering forth the Cataclysm. Where once was a mountain, the destruction of the magical statue leveled the entire mountain and sent meteors across the sky that could be seen continents away. It is said that this area is so polluted by magical essences that when one stands in the middle, they can feel themselves standing in multiple dimensions at once. Many speculate that there are valuable treasures to be found in Estel’s Grave, though nobody has ever returned to tell the tale of the potential wonders.