The fierce and barbaric race of the Orcs are renowned and often feared for their warlike and aggressive nature. Originating from the yet uncharted continent Guldar far to the west of Daendroc, a hostile continent with great beasts and hostile poisonous plants. The Orcs are descended from the Seraph like the Elves, Dwarves and Humans, but developed for a more hostile environment. Present day, Orcs can be found far and wide serving in Human societies, or staying in their old tribes. Strong fighters, guards and the like, Orcs are a much welcome addition to any army due to their resilience in battle. The fact that employing Orcs to do the heavy work for Humans, and having less Human casualties during war time certainly contributes.

Their whole race went on an exodus east after the plant life on their islands suddenly started polluting the air. Upon arrival in Daendroc, 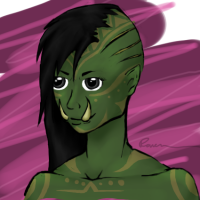 Orcs have almost relentlessly raided human and, in particular, Elven settlements. Such assaults have brought upon civil unrest and strife for the Elves, following the fall of the Elue Dominion. Orcs typically reside in remote tribes, far from other Orc settlements. However, on occasion, great warlords have been known to raise armies for the purpose of annihilating neighboring settlements, razing cities to the ground, and even bringing great empires to their knees. Orc tribes differ in cultures and ideals, but most Orcish societies are dominated by honour and feats in battle.

The Orcs of Daendroc are well known for being large and intimidating beings. Their ferocity and aggressiveness is only complemented by their grotesque physical appearance. Orcs can be very tall with large broad shoulders. Most orcs are heavily built with muscle. Unlike the pale Elves and Humans; Orcs typically have green or grey skin. They have pointed ears which they, like their elven cousins, inherited from their Seraph ancestors. A well known trait of the Orcs is their tusks that protrude from their lower gum line; they have been known to use them as weapons in hand to hand combat to bite or gore their opponent. Mostly, Orcs have dark coarse hair in their youth, but as they age it starts to turn grey and white. The most common eye color of the Orcs are dark brown, black, red, or even yellow. The older Orcs are often covered with scars of previous combat.

In the past, Orcs have worshipped, the so-called, ‘mother and father’ of the Orc race; Vakgar, and his spouse, Yazgar. Vakgar is praised as the source of the inherent physical strength and fighting skill of the Orc race. Orc warriors often make sacrifices to him before going into battle, in the belief that his blessing will give them strength and shield them from pain. Yazgar is worshipped as the mother of Orc culture, wealth, and fertility. When Orc men take wives, they are put before the judgement of Yazgar. Traditionally, the couple embark on an assault on a neighbouring tribe or village. If the couple return safely, then Yazgar has given her blessing, and the two will have a fruitful life together. However, many tribes have since strayed from such traditions, but a few still practice such rituals. The Orc political system varies from tribe to tribe, but generally they all follow the same basic concept. There is one Orc leader per tribe; he is known as the Chieftain of the clan and he gains his status from either defeating the previous Chieftain in mortal combat or the general consent of the clan. Below him, there is the Shaman, who is the religious leader of the tribe. He guides and advises the Chieftain in actions that will keep the tribe in good favour with the ancestors and the ‘mother and father’ deities. The next in command is the War Chief. Only in some tribes you will find one, because the Chieftain might take this rank into his responsibilities. The War Chief is in charge of maintaining and training the army to be as deadly and brutish as it can be. Everyone else is below these three and must follow their commands or they risk exile or death.

The Orcish language varies between each tribe, but in general it is a very guttural and simple language, no-where near as smooth and eloquent as the Elven tongue. Orc tribes often add signature prefixes to their last names. These vary for gender and rank, but generally consist of a two to four letter syllable such as ‘Gro’ or ‘Ugk’. In Orc culture, It is considered strongly offensive and provocative to shorten or abbreviate and Orc’s name without specific permission. Orcs have been known to kill over such insult. Orcs don’t have a lot of variations in clothing. They generally wear whatever they pillage or whatever they can get from pelts and animals skins. Some orcs though have been known to wear elvish clothing. Orcs raise their young in litters, often of ten to fifteen pups. However, from birth, Orc pups are left to their own devices in so-called ‘pits’. This is an ancient Orc ritual, intended to separate the weak from the strong. Often only one or two pups will survive the pits, this shows the Orc clan that the pups are strong enough to defend themselves, and prove they have earned their right to live.

Very little is known about what actually happened on Guldar besides the tales of poisoning. The only stories that exist are Orc tales passed down many generations, of which the credibility is often questionable. The surviving Orcs left their homeland in masses, sailing across the open ocean looking for a place to call their home. They landed in Daendroc. The Orcs started deforesting the land, because of their fear of another poisonous plant outbreak. They were greeted by elf armies that sought to rid their homeland of these new savage people who destroyed their homes. The Orcs reacted with violence and savage determination. They were driven from their homes from a foe they could not fight on the battlefield, but now they had a clear adversary. They could fight the Elves and were all too happy to have a chance to fight another exodus. Without mercy, and without regret, the Orcs slaughtered the Elves. The Orcs took to feasting on elf flesh, because they were not educated in the ways of growing crops. Killing elves as a way to sustain their army’s appetite. The first move against the Elves was to take the great coastal citadel held by Cedron, son of the late elven emperor. The unprecedented numbers of the orc armada took the citadel with ease. Orcs would boast of how the waters turned red from the slaughter, and how the great Cedron begged for mercy like a child before the end.

The Orcs held the citadel for a few days, to regroup and collect their sorts. However, as the Orcs rested, the brother of Cedron, Cedral, and his forces. Cedral charged the Orc horde with pride and confidence, but he underestimated the Orc’s numbers and skill. The armies of Cedral were crushed as his brother before him.

From here, the Orc invasion progressed almost too fast for scribes to note. Elven settlements were pillaged, citizens slaughtered. Even the great library of the White silver city was ransacked and the princess Cillian kidnapped or killed. The Orcs saw that their work was nearing an end, the elves had been all but wiped from Aloria, but they needed something more. They needed a statement so great that no-one would ever dare to cross the Orcs again, not as long as the mountains stood firm and the sun shone in the sky. The Orcs set their finest Grills to work, constructing a weapon to bring down the great tower of Rie, the Elven capital. At the time, this tower was the tallest structure in all of Aloria, and the splendour of Elven architecture. Finally, the Grills finished their work, delivering the “Great Boom”, a vast bomb capable of destroying the vast foundations of the Elven tower.

The bomb was placed at the base of the tower of Rie. Even the Orcs fled the area before it’s ignition (save the poor Gratts who were tasked with lighting it). But not even the Orcs foresaw the destructive power of the bomb. Upon detonation, the tremors were felt as far as the continent of Ceardia. Nearby trees were torn from their roots, rocks were cleft in two and the very earth was rent asunder. It was said that is took days for the smoke and dust to clear. Clearing to reveal that the bomb not only destroyed the tower, but had sunk the entire city into the ocean. The orcs had done nothing short of crushing an empire, and demolishing the elf capital.

Orcs nowadays do not command as much power as they did at the fall of the Elue Dominion. After the fall of the Elves the Orcs fought and killed one another for rights of leadership and spoils of war. Old traditional feuds resurfaced and soon the sizable orc force split up and formed their own isolated tribes and communities. These small clans raided and pillaged their neighbors and each other, as before. Ultimately, as other races settled Daendroc, they saw these orc villages as pest that needed to be removed. The orc strongholds slowly fell over time, leaving only a few clans standing this day. Some modern Orcs feel that they need to start to integrate with the current dominant human society. That is why you will see Orcs serving in human armies as mercenaries or full blown soldiers. To this day, a few Orcs hold onto their traditional beliefs and culture. They hope that one day their kin will return to their former glory and status in Aloria.

In recent times, the Blood Stone and Black Iron Orc tribes of Daendroc are still at war with the Elves that linger on the continent. Often they also cross paths with the Human settlers, but the rest of the Orc tribes have since moved on to different continents, or integrated to Human cities. In very recent time, Orcs were elevated to second class citizen in the Regalian Empire, serving in the city guard and the Regalian Navy and Army as well received shock troops and cannon fodder. The Regalian Empire itself however, has allied with several Elven tribes, formally taking a stance against those Orcs left behind in Daendroc. The moral choice between preserving their existence in the progressive Human societies, or clinging to old dying cultural beliefs holds many Orcs in conflict to this day.