Difference between revisions of "Alchemy"

While the base principles of Alchemy have long been studied by the Allar people, its widespread usage is one of the more recent technological advancements of Aloria. Since its discovery by the wider world, curious inventors from all walks of life have unearthed new ways to blend together both natural and magical ingredients in order to create effects available from no other known substances. People in occupations everywhere from Medicine to Warfare have benefitted from the diversity of this once-secluded art, granting possibilities that were once limited to only the Magic-users and technological kingpins of society. The popularity of Alchemy only continues to grow as the equipment involved in making it becomes more predictable and advanced.

The practice of alchemical experimentation in its most basic form is thought to be so ancient, that even in the present day Scholars have been unable to uncover a definitive point at which the discipline was conceived. From the few texts which survived the Chrysant War, it is believed that the Allar were the first race to truly practice the complex tenets of alchemy, learning the art from their ancestors and developing their society around discovery and chemical enlightenment.

The oldest known evidence of mixing natural substances to create new, more powerful effects comes from the Sendrassian Civil War, beginning around 70 years before the Cataclysm. During this early period, alchemy was primarily used for crafting medicine, and the Al-Allar who practiced it (or those who gathered the materials for its limited practitioners) were able to earn a substantial amount of prestige and fortune. As the war progressed between the Void Converts and Empire Loyalists, alchemical weaponry through the inclusion of black powder and local poisonous flora was discovered. By the conclusion of the civil war, the Al-Allar had become both proficient and reliant on their developing craft, and when the Loyalists fled Sendras to neighboring Hadaria, they took their knowledge with them.

In the years following the migration, the creation of a formal alphabet and written language meant that for the first time alchemy became an easily teachable subject. It was during this time that the name ‘Alchemy’ was coined for the practice, in relation to the Allar’s primary religion: The Great Alchzech, which taught that ‘every being, substance, and event is part of a greater existence’. The council of the Soor-Rassa-Allar, majorly responsible for keeping the differing Kingdoms of the Naylar race unified, became colloquially known as the “Court of Alchemists” due to its close association with the growing sciences. Knowledge of alchemy was however kept secluded due to the Allar’s relative isolation, and beyond a few passive encounters by curious Elves and Ailor scholars, few civilizations took notice of the practice due to its perceived link with the race’s non-aggressive philosophy.

The first instance of alchemy being encountered firsthand by the wider world was during the Chrysant War, when the Regalian Empire forcibly encroached on the Allar’s homeland. While the Ailor people were notably superior on the water, they were initially unprepared for the chemical warfare that the Allar had been perfecting for a long time. It was in response to this that the Regalian Empire targeted Hadaria’s libraries, resulting in the subsequent incineration of thousands of ancient texts depicting the Allar’s most powerful discoveries. A large percentage of recipes, with blueprints for advanced glassworking equipment were destroyed during the Chrysant War, along with the lives of countless expert alchemists who were henceforth unable to pass down their knowledge. When the Soor-Rassa-Allar peacefully submitted themselves to the winning Empire, the practice of alchemy was immediately outlawed within Regalian Archipelago, considered to be heretical and an anti-imperial practice.

However, despite its illegality, word of the new scientific discovery would soon reach Regalia through participating soldiers, scholars, and travelers. Explorers who visited Hadaria (along with a few defective Allar looking to make quick coin) were able to salvage alchemical textbooks from the ruins, and broken knowledge of the art quickly leaked to the common citizenry. Despite attempts made by the Violet Order, the spread of knowledge and the popularity of alchemy was too rapid to contain, and soon its tenants began to be practiced by both scholars and black market criminals alike. It wasn’t until late 293AC that the ban on alchemical practice was formally lifted, when a few notable advocates were able to shine a light on the beneficial opportunities that alchemy presented.

Since the legalization of alchemy, it has become commonplace to see practitioners of this study seeking employment within noble families, similar to that of scribes or scholars, and roaming throughout Aloria in hopes of regaining some of the rumored alchemical treasures that were lost during the events of the Chrysant War. Alchemistry has become a respected profession, and its creations can be seen and widely used in hospitals spanning the Empire, as well as in select military disciplines. Still, ask any Al-Allar, and it is told that the current abilities of alchemy are far below those which existed in the old Allar Empire. 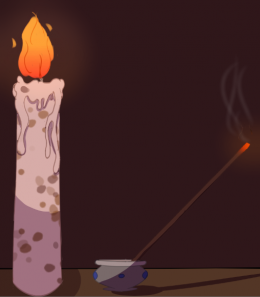 It is possible for alchemy to be formed into candles or incense if a Tallow Base Form is combined with Fireweed.

While the process of creating alchemy differs greatly between various concoctions, there are a few basic features which separate the practice of alchemistry from more mundane mixing affairs such as cooking or herbology; the first of which is the usage of specialized mechanical equipment developed by the Allar. Though many have tried to utilize cheaper and more accessible tools--such as cooking pots and churns--for the creation of alchemy, the lack of precise measurements involved in the use of these vessels has lead to many amateur alchemists having their arms singed by chemical burns.

The oldest and most rudimentary piece of alchemical equipment is the alembic. This copper (or in some cases glass) apparatus features a round, enclosed vessel with a downwards spout protruding from the top. When placed over a flame, the alembic can be used to evaporate water and essence from any ingredient placed in the bowl. Alembics are used in almost every step of the alchemical process, ensuring that only the purest forms of ingredients are used in the concoctions. Other apparatus frequently used in the creation of alchemy include mortar and pestles, cauldrons or crucibles, retorts, sand baths, condensers, ice boxes (or ice rooms), and filters. Where financially available, dedicated practitioners will often connect and autotomize as many steps of the process as possible to prevent contamination. This has led to the quintessential image of the ‘alchemy lab’: a room cluttered with glass pipes that run overhead and connect vessel to vessel, developing ingredients into their chemical forms and storing them for use without any direct touch necessary.

The second feature that separates alchemy from its mundane counterparts, is the three-step process (minimum) that is required for any combination of ingredients to be considered alchemy. Every ingredient used in the practice falls into one of four categories, which is decided upon by the Soor-Rassa-Allar: Base Forms, Base Modifiers, Effects, and Moderatos. The qualities of which shall be described below.

As a general rule, all alchemy must include at a minimum: one Base Form, one Base Modifier, and one Effect. Additional Effects may be added, but only from the same Category or a Neutral Category. For example, Two Positives, Two Negatives, a Positive and a Neutral, or a Negative and a Neutral are all allowed; however, a Positive and a Negative will result in the mixture bubbling over and producing a chemical explosion. If a Moderato is added, it is crucial to remember that the Moderato will only modify the last Effect to be added to the potion.

While alchemical concoctions can theoretically be made as large as one can acquire the ingredients and vessel for, strict regulations has meant that all alchemy products come in standardized glass vials that are made and distributed around Aloria. These vials come in a multitude of shapes, such as spheres, slender bottles, and conical flasks, but always carry the same amount of liquid, powder, or gas on the inside. They are small enough that up to three can be carried on a specially-designed protective belt or in cushioned satchels, but large enough that only one can be held in the hand at a time. Carrying alchemy in a pocket is ill-advised, due to the high likelihood of the glass smashing with any amount of force. Attempts at pouring alchemy into any vessel but the pure, strengthened glass devised by the Allar will always result in contamination and subsequent failure to produce any effects. 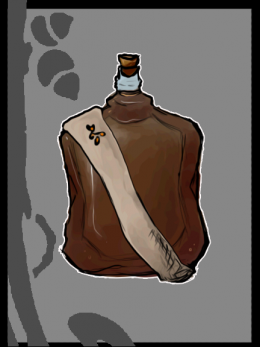 Belts made specifically for carrying Alchemy have thick leather pouches to protect them from damage.

With no exceptions, all Alchemy must be acquired ICly from an approved character with the correct amount of Proficiency points. However, it is not required to acquire the ingredients for the Alchemy IC (with the exception of Special Ingredients) due to the impracticality of finding a vendor for each of the specific items involved. It can be assumed that all necessary ingredients would be available on the market or from specialty shops, unless otherwise deemed illegal by the current Regalian Government.

Due to the volatility of alchemy and the activation process required for any Effects to take place, Alchemy beyond a 5 point requirement cannot be activated by individuals with no knowledge of the practice. An Alchemist will need to be present to activate it for them, after which it must be used within the window of effectiveness for that Base Modifier. The Proficiency requirements for each level of alchemy is as follows:

The character can make use of all Alchemy sourced from another Alchemist.

Base Forms dictate what state of matter the Alchemy will be; a solid, liquid, or a gas. Only one can be chosen.

Base Modifiers dictate what the method of activation for the Alchemy will be. Only one can be chosen.

Effects are the main ingredients. They dictate what the Alchemy’s primary effects will be when activated. A maximum of two can be chosen, dependent on the amount of Proficiency Points the alchemist has (See above).

Special Ingredients are extremely rare, and can only be acquired from Lore Staff during special events, progressions, or from the Crime System. Anybody found using these ingredients without Lore Staff involvement will be subject to God-Roleplay punishments.

Moderatos change the effectiveness or properties of the last Effect added to the Alchemy. Only a single one can be chosen, dependent on the amount of Proficiency Points the alchemist has (See above). A Moderato will only alter the last Effect that was added in the recipe.