Vampirism, also known as the Sanguine Curse, is a Void-spawned blood-curse that has plagued Aloria for hundreds of years. Often seen as a disease and hated by most of the people of Aloria, this affliction causes the infected to undergo both physical and mental transformations. Vampirism is a disease that can be cured by rather aggressive magical means, though many Vampires desperately attempt to avoid being cured. This is caused both by the curse itself changing the thoughts of the infected, but also by the fact that most authorities across Aloria are excessively cruel to Vampires. In the Regalian Empire, being a Vampire is seen as being something unholy, something akin to a Demon. Such creatures are either killed on sight by Vampire hunters or dragged away screaming to imprisonment and isolation. Frequent Vampire executions are held by the faithful, causing most Vampires across the world to live in hiding, in dark alleys, caves, and sewer tunnels. Indeed, Vampires are considered leeches on society as they feed themselves on the blood of the unwilling and powerless, empowered by darkness and Void Energies. Whole religions have been founded on the idea that Vampirism is the next step in Human advancement (despite the curse also striking non-Humans), and some contract the disease willingly for the powers it grants. Globally, Vampirism is on the rise since the last Great Vampire Wars. Global conflict with the Void Invasion, Imperial wars, and more recently, the Bone Horror Crisis, have all weakened local authorities to the point of breaking. Vampires often follow in the wake of a weary population, feeding and making use of what they can. Vampirism has grown so prolific that among the Regalian Emperor’s close court, some nobles have fallen to the sway of Vampirism, secretly plotting the destruction of the Empire from within. Even far in the north, a Vampire Principality exists in Ellador, the state of Dorkarth entirely inhabited by Vampires and their feeding cattle.

Vampiric Infection can happen in three distinct ways. The first and most obvious manner of becoming a Vampire is to consume a small goblet filled with infected blood. Simply taking a sip or consuming a droplet is not sufficient. After all, the disease is a blood curse, not an actual contagious disease. The act of drinking infected blood is considered more of a ritual than an actual infection by the blood itself. The next way to become infected is to be bitten, or have one’s blood drank by a Vampire of any Bloodline. There is a rough fifteen percent chance that a Vampire bite leads to a Vampiric infection; perform a /dice 0 100 to roll between 0 and 100. If your dice result is below 15, your character has been infected with Vampirism. Inquire with the Vampire that bit your character what Bloodline they should become. The final method to become a Vampire is to perform the dark ritual, which involves sacrificing a goblet of blood to a Dark Altar through a ritual called the Dark Blood Feast. It largely involves ceremoniously sacrificing a goblet of someone else’s blood and then consuming it to surrender one’s will to the Arch-Demon. This process always results in the person being infected with Vampirism. The Vampiric Infection process is practically the same for every Bloodline, detailed below.

The most obvious effect of Vampirism is that even though it does not alter the personality of the Vampire, it forces their mind to see Vampirism as something beneficial, and causing them to resist to their utmost ability, any attempt to be forcibly cured by others. Vampirism is dangerous when exposed to it for several decades on end. Those with a weak mental will eventually succumb to blood lust and become devolved blood crazed beasts, losing their speech and social skills and craving nothing more than the next feeding. Those with a strong mental will become cold, arrogant and self aggrandizing with little regard for others, even family. Vampires sometimes form groups together even if they are not related or turned by the same Vampire, these groups are called Coven. Often, a Vampire who turns many other Vampires founds a Coven, though more often than not Vampires simply randomly form Covens to find safety in numbers, as Vampires often find themselves hunted by non Vampires. 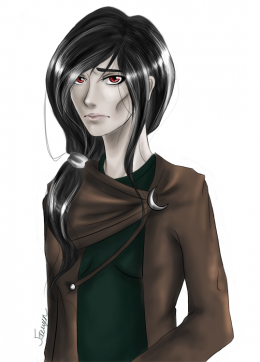 Vampires that do not feed frequently lose muscle and body mass, becoming frail and gaunt.

The Vampiric infection process takes exactly four days after the first bite has occurred and the person was infected. It is not possible to cure Vampirism during this initial infection process. A Vampire can only be cured when the Infection has taken hold, so sometimes Vampires caught in the process of turning are locked up until their change has completed.

For the first day, Vampirism will seem much like a typical, common ailment. The freshly infected have just had the curse introduced into their system, and will be faced with increasing dizzy spells, sickness, and chills. Their heart rate will vary from fluttering beats to slow pumps and they will be susceptible to headaches. Around this time, the transitioning Vampire may also notice a sensitivity to lights and sounds , which may be mistaken for a migraine. As the day progresses, the early chills are prone to growing more extreme and the sensitivity to light and sound can cause increased frustration.

As the second day comes around, the symptoms only continue to get worse. Transitioning Vampires will notice aching and bleeding in their teeth if fangs are developing, accompanied by urges to swallow the blood and ingest more. Thirst and dehydration will begin to take effect, but normal water and drinks do little to satiate it. Meanwhile, the infected will begin to think about blood more, contemplating its taste and noticing it more acutely in the environment. By the end of the second day, the future Vampire will begin to vomit. . Despite having a freshly emptied stomach, the infected will no longer have an appetite for normal food.

The third day is considered the worst, and has been known to dissuade people from becoming re-infected with Vampirism entirely should they be cured. The infected will wake up with incredible pains in their chest and extreme chills. Throughout the day, the newly-infected will be forced to fight off impulses to bite loved ones, feast on blood, or kill those they care for. As the day progresses, their heartbeat will grow more haggard. Breathlessness will occur, and the infected will undergo crippling pain, typically from their bones and muscles. By the time evening falls on the third day, the infected will feel like they are dying. Often they feel frozen, distant, and as if their body is dying but their soul is trapped within. It’s not uncommon for a Vampire at this stage to see their life flash before their eyes, or have hallucinations of the afterlife.

The instant the infection process is complete, it is as if the infected has woken up from a long, deep sleep. Thirst for blood becomes overwhelming, and Vampires have been known to spring from what may have been the victim’s deathbed seconds before and throw themselves at anyone unfortunate enough to be nearby. This is often called the bloodlust stage of Vampirism, and the Vampire will have to drink enough blood to fill their stomach--usually anywhere between one and a half to two liters. Once they’ve accomplished this, their senses return to them and they begin feeling stable once more. At this point, the traits and abilities of Vampirism take hold. After being infected, Vampires become naturally thinner. While some ripped or athletic Vampires do exist, Vampires generally lose a strong appearance and become thinner and more graceful instead.

Vampires feed though the use of their enlarged canines. Anyone who is infected with Vampirism has enlarged canines that are used to puncture skin and draw blood from a victim. When feeding commences, a Vampire will usually expose a large area of skin, either a neck or a wrist, and proceed to plant their teeth forcibly onto the location which causes blood to be drawn. Vampire saliva is a natural coagulant (not strong enough to make blood solid, but turn it into a sauce-like consistency), thus making it easier to consume. When activating the feeding, a Vampire's eyesockets also darken while their eyes grow more intense and solid black while they feed. A Vampire will proceed to then consume any amount of blood (either as much as they can or until they are satiated) before releasing and usually fleeing. The natural coagulant prevents the victim from bleeding out, but feeding is still dangerous. Any target that is capable of becoming infected has a 15% chance to become infected per feeding session. Furthermore, Vampires transmit any diseases they suffer from to their victim. Many races and conditions have different levels of taste and effects on Vampires feeding from them, explained in a table below. It is necessary for a Vampire to feed frequently (and IC, not NPC feedings OOC). For every week that a Vampire does not feed, they lose strength by half, meaning that they are barely able to stand after four weeks of not having been fed. Blood of only certain races and conditions can satiate Vampires, as explained in the table below also. Being fed on is painful, though not in a extreme way. It feels like a constant cramp wherever the person is being fed from, though stronger individuals are able to resist the pain better. Curiously enough, Void worshipers suffer no pain from being fed on at all, while Mages are unable to cast Magic while being fed from.

Any vampire of a bloodline that can be cured, can be done so through Celestial Magic, or extreme bloodletting. Curing through Celestial Magic involves consistent use of Pervei (Cleanse Form) and is usually an exhausting process for both the mage and the Vampire. It can lead to death if both are not cautious. Curing typically only takes a few days to a week. When curing in-character, the process will take three days in real life. The chance of death remains dangerously high if a victim tries to cure instantly, but gradually decreases the more time it takes to cure. Once a cure happens, most the effects of Vampirism will revert after those three days. There are some common side effects of curing of Vampirism. It can take anywhere between one to four weeks for these side effects to wear off: