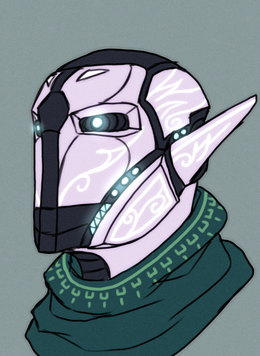 Bronn often have ear-like plates that appear Nelfin-like, even if they don't have actual ears. 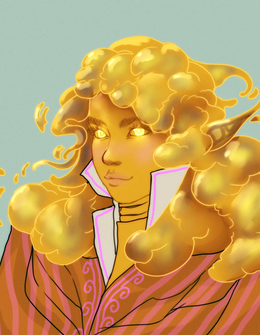 Despite being made of viscous fluid, the Bralla (just like the Bronn) wear fancy clothes. On their homeland, they are summoned with Primal Magic. 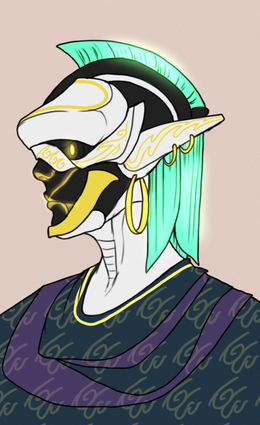 Bronn head shapes often resemble helmets, curiously, of a variety of cultural designs despite never having had contact with them.

The Bralona are an enigmatic Race from a series of islands to the far south-east of the known world, filled with rose-quartz statues of Dragons. The Bralona have had little to no interaction with the wider world for presumably thousands of years, and spent most of their history in a never-ending civil war between subraces, of which the origin is lost to time. Having only recently learned that the rest of the world is filled with sentient Races and mysteries to solve, both the Bralla and Bronn subraces of the Bralona Race ventured forth into the world to meet, explore, and dissect all things unfamiliar to them.

The Bralona are ever-curious and on the move to see, feel, taste, hear, observe and experience new things. While other cultures have a level of legal and moral constraint to their scientific pursuits, the Bralona care not for such trivialities, and engage in rampant research and discovery without concerns for the collateral damage. The Bralona are ever amazed at all the things that others have developed, from concepts like burials, births, charity, government, and social norms, to religion, relationships and money. Going from a world where the Bralona just did whatever they felt like and nobody bothered them, to a world where every action they perform has consequences, they can feel very out of place.

The Bralona have no religion, though it is not exactly correct to simply call them Atheist. They are more specifically anti-theist, meaning they find all concepts of religion completely abhorrent and try to show other Races that religion is folly, the Gods aren’t really divine, and they won’t help them. The Bralona claim that they once killed their Gods, and that the other Races can do this too to unlock their true potential by being lords and masters over their own destiny. There is a heavy-handed implication that the Gods they killed were Dragons.

Both the Bralla and Bronn don’t have traditional organs, a nervous system, blood circulation or even a brain. Their soul is the sole part of cohesion, and their body is shaped as whatever they like it at any given time. As well, their bodily composition allows for a great deal of sensory information transfer. A Bralla or Bronn can envelop around an object and understand a great deal about it, which is also the main way of them interacting with things.

Many Bralona work as scientists, and believe that progress and invention are the first priority. They are often willing to watch thousands die if it means inventing a single disease cure, or collapse an entire ecosystem to learn the mystery of predator cross-breeding. Not only this, but they also enjoy research that has no purpose. Hypotheses such as: setting sad people on fire does not make them happier, playing with bricks does not cure alcoholism, and making others homeless is bad for their health, are considered valid study topics among the Bralona. The value is not in the conclusion, but in the journey of research.

The Bralona have an inexplicable hatred for Dragons and all things Dragon related, which is related to their history with their creators, the Rose Pink Dragons. The Bralona are not secretive about the fact they are an artificial Race and that they were created by the Rose Pink Dragons, who they slew before turning on each other for unknown reasons. While a Bralona won’t outright attack an Archon in the street, it would require a serious amount of convincing or statistical data to turn a Bralona’s opinion of Dragon matters around.

Bralona are split into the Bralla and Bronn subraces. The Bralla can best be described as humanoids made out of partially or wholly see-through viscous fluid, almost akin to slime or goo. The Bronn can best be described as humanoids made out of mechanical parts and metal, though it appears they function more like a clump of metal welded together without individual moving parts, than an actual Automata which is powered by gears and moving mechanical parts like Engineers produce. Both subraces are mentally identical, and have similar physical characteristics beyond the obvious fact that one is slime-like, and the other is metal-like. As a result, this section will discuss the Race’s characteristics as a whole.

Bralona are intensely curious and exploratory. They have to experience new things: like the food, drinks, activities, art, and philosophies of the world around them. Always willing to see new places, the Bralona bounce with energy, only truly put off and sad when told off for their excitement, or denied a chance to learn. This curiosity makes them seem harmless, which is far from the truth. The Bralona have lived for millennia without a concept of morality–an idea they are discovering for the first time. While they can obey moral codes to make their lives easier, they are equally capable of committing every kind of tyranny and terror with a smile. Bralona, besides their curious, exploratory and energetic nature, don’t have strictly set personalities. Unlike other Races, their personalities can change from month to month beyond those basic traits, either from outside factors, experiences, or just randomly because they feel like it.

The Bralona defy any sort of categorization with other Races. While the Bralla and Bronn look dissimilar, they are identical, just made with different substances. Bralona don’t have organs: they are made of pure substance (slime or metal), though have a great deal of functional control over their body. While they for example lack a digestive system or circulatory system from which they can become intoxicated, they are able to control their body in such a way that it produces these functions and simulates their features. Bralona (unless they create one) don’t have reproductive systems and don’t reproduce - their Race was created with a finite number of members, each one individually immortal. Bralona have a great deal of control over their bodily functions, they can become see-through, squishy or hard, change orientation of limbs, substance colors and glow. It is important to note that the Bronn never appear mechanical. Their bodies are not made out of pumps and gears, but just clumps of metal or shapes of metal held together by extreme magnetics. As such, they should always have more organic looking shapes with curves and rounds as opposed to hard lines, though contours can be used here and there (see art for reference). Bralla equally look more rounded and soft because their fluid mass doesn’t allow for extreme fine-detail, though in some places where hardened the slime can become more detailed.

The Bralona subraces have presently unified into the Bralla-Bronn High Command, and together invaded the isle of Regalia, looking to put it under occupation and tap it for knowledge. Although they were pushed out, High Command is still going strong in their home island of Justinia. Although they are under High Command truce, Bralla and Bronn can still be venomous to each other, because before that point they were at war for millennia. There is also an ongoing rebellion in the Bralona homeland with an arm in Regalia, composed of the Bralona who do not agree with the ruthless ways of High Command.

Racial Abilities are generally a set of unique powers and effects that all peoples of that Race all innately have, while Specials are more passive, aesthetic focused capabilities. Specials are defined per-page, while Abilities can be searched on the Ability List page to determine their generic function. Bralona have a mix of Abilities and Specials themed around their substance bodies and being able to change it. There are no Half Bralona as Bralona cannot reproduce. Bralona Abilities are complicated, and as such, the Bralona Race is not recommended for new players.

Note: Bralona by default have all of the "Bralona Modifiers", but, get only 1 of the two modifiers between "Bronn" and "Bralla" modifiers, based on their subrace.

The Bralona speak pure Dragon Speech, though mysteriously, also speak perfect Common. Bralona are inherently non-gendered but do have a gendered presentation, and as such all Bralona names can be used interchangeably. Bronn names must always include two n’s, while Bralla names must always include two l’s, both following each other. Bralona don’t have surnames or even family names: the only times when Bralona adopt additional names, is when multiple Bronn or Bralla join a single Bronn or Bralla as their leader. Then this leader names their group, always with extremely short names with a single l or n, for example: Ral, Ran, Ton, Qal, Pel, Hen, etc.

It is unclear whether the Bralona ever worshiped anything. However, they are willing to refer to Dragons as Gods (in the past tense only). This is in light of the fact that even though the Rose Pink Dragons created them, they killed them and usurped mastery of their own destinies. This is what led to their anti-theism, which is discussed in earlier sections. It is possible for a Bralona to adopt a religion when living in Regalia for an extended period of time, but this is exceedingly rare.

World View is optional content that helps give Bralona flavor and depth.