Praised by some and condemned by others, Magic is a topic of heated debate amongst the people of Aloria. Magic is a catch-all term for the use of Essences from different Dimensions to reshape reality. For as useful Magic can be, it is also just as dangerous, having caused both prosperity and calamity throughout the ages. In the modern day, Magic is rarer and less understood than it was in the past- the average person views Magic with suspicion and fear. Even so, there are still people that seek to understand or even utilize Magic. One thing is true no matter where Magic is found: for those willing to accept the risks, Magic is a tool of unrivaled power. 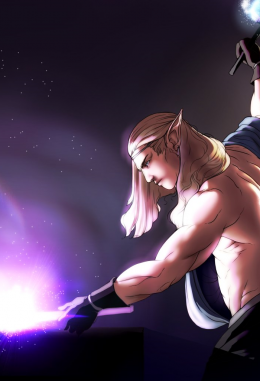 For many, Magic is part of their jobs and livelihoods.

The history of Magic is often scattered and hard to pin down. Magic is however universally thought to originate from the long-dead Seraph civilization: the first to learn of the Void and Exist, who pierced the Veil that lay between them and Aloria. At the time, Magic was thought to be widely used up until the first Void Invasion; an apocalyptic event that saw the end of the Seraph civilization as we know it. After the world recovered, there would be a number of other major events tied to the overuse of Magic within the world, with each time it happened reducing the number of those still willing to utilize otherworldly powers as a whole. In the modern day, Magic is much rarer than what was seen in the past, heavily scrutinized by authorities who know of the dangers it can cause. Even so, only time will tell if history will end up repeating itself once again.

In the past, there used to be an exceptionally powerful brand of Mage known as an Archmage. After the Cataclysm, which severely weakened all non Primal Magic in the world, these Archmages have become all but a piece of history from long ago. It is not possible to play an Archmage in Regalia. However, there exist those with either uncanny connections to sources of Magic, or who have devoted their lives to the arcane arts, who are slowly recovering this knowledge, and learning unique skills that set them above their peers. Overall, many Magic users have been at the heart of the wide range of arcane calamities and strange events that have been striking the world with ever-increasing frequency since 300 AC. This has provoked a wide range of responses but overall, Mages and their powers are here to stay. 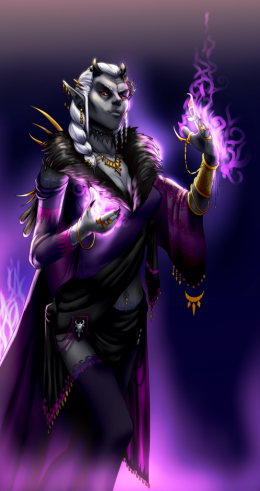 For others, Magic is a powerful tool to fulfill their ambitions, and in the process, commit great evil (or good.)

In the capital of the Regalian Empire, the City of Regalia, Magic is seen as something one should be cautious of. Although it is not expressly illegal, many different people within the city see Magic as the abnormal thing it is, and Mages can be subjected to discrimination because of such. As time passes however, more and more people are becoming more accepting of Magic users within the city, leaving the question of if rules and regulations will change to accommodate for this up to debate. If one thing is for certain however, it is that Mages must put more effort into being accepted in society compared to their mundane counterparts, regardless of what plane they pull from.

Either by birth or by study, those that choose to utilize the power of Magic in Aloria are known as Mages. Due to the personal nature of one’s forming of a connection to the veil, no two Mages are exactly alike in how they express their will upon the world. What is uniform however, is what they do to gain their otherworldly powers. Every Mage, bar a few specific examples, draws their Magic from a connection to the Veil, piercing the barrier between dimensions in order to siphon essences for their own personal use. A connection to the Veil can form in any number of ways, some Mages seeing it as a religious experience, while others treat it more like an art form. No matter the method or origin of the Mage however, each one draws from a particular essence depending on either personal preference or variables outside of their control.

Not every Mage is created equal, to note, with some demonstrating an uncanny talent for manipulating the world around them in comparison to others of the same class. The first of these groups are Greater Mages, a step above normal Mages in their dedication to the arcane. To read more about how to achieve the status of a Greater Mage, click HERE.

The second of these groups are the Empowered Mages, possessing a unique gift or link with one of the four sources of power in Aloria, and benefiting from this to perform feats of Magic not seen before in the modern day. To play an Empowered Mage requires a Custom Kit, which can be applied for HERE [1].

There exist three foreign dimensions from which Magic-users can draw their powers. The Void and Exist were the two dimensions breached by the Seraph, which provide almost all of what is traditionally understood as Magic. The Void is associated with chaos while the Exist is associated with order, though different civilizations’ favor towards either dimension has caused them to be associated more with those civilizations than with any inherent qualities they might have. Exist Magic is associated with the goddess Estel and her Estellon Religion, as well as the Allorn Empire and the Teledden and Yanar Races, while Void Magic is associated with Void Worship, Theurgy, and the Kathar Race, having been pioneered by these groups primarily. Each Dimension has its own inherent gods, but also extremely powerful Mages called Arken, more akin to demigods. Arken are explained on the Silven page, which discusses the children of Arken and mortals. Although Void and Exist creatures hate each other and the fundamental concepts of each Dimension are directly opposed, those not immersed in the lore of Magic see little difference between them. Societies which hate Magic hate both of them equally, while others (the Exist-loving Teledden or Void-loving Kathar, for example) embrace one and decry the other as evil and corrupting. The truth, as always, is in the middle.

The third plane that Mages are able to pull from is the Bintaar, a parasitic realm which has turned itself into a mirror of the living world. Somewhat rarer than their Void and Exist counterparts, Ordial Mages pull from entities residing in a realm of death. Ordial Mages are an enigma to the wider world, as for centuries they have operated in the shadows, their theories and knowledge neglected by broader society. Part of this is due to the negative perceptions behind Ordial Magic among the Ailor, but also among the Races of the Allorn Empire, where it was always a slightly uncomfortable subject, treading into knowledge the Asha and their Dewamenet Empire held. In the modern day, the Asha and Songaskia are the two Races known to have the most Ordial-aligned individuals, but this may be flawed information due to the aforementioned secrecy and enigmatic nature those of the Ordial-alignment have adopted. They often have a sinister reputation as well, for while some of their number use their skills for the betterment of others or healing of the living, many more worship the power a realm of death can bring, and the control it may grant.

While most Mages draw their abilities from extraplanar sources, there are a rare few examples of Mages that instead draw on powers found within Aloria itself. Known as Primal Mages, these casters typically have a deep connection to Dragons, due to many of them having obtained their power from such. Some of the most common Primal Mages are the Crown Witches, a lineage of Archon focused on the healing of the world around them. In comparison to other classifications Primal Mages are typically expected to have close ties to Dragons in some way or another, enacting their will in order to preserve the life of the world around them. Because of this, many Primal Mages see themselves as the only “true” form of magic, one with little to no adverse effects on the world when they use it.