The Manathar were an Affliction in Aloria which emerged from the desire of a group of Kathar to further their evolution as a Race. The Pride Arken fulfilled their desire, but within just three years, took away the Affliction from the world. The three Legions, or strains of the Affliction, created rather demonic-looking individuals from any Race of Nelfin background, including Half-Elves, and capable of absorbing groups like Silven into their ranks through the transformation. Ultimately, the footprint the Manathar left on Aloria is uncertain, as while some individuals used their power to aid in various expeditions and conflicts across Aloria, many more faded from memory, or left little lasting impact beyond their appearance.

The Manathar were originally Kathar of the Dread Empire who sought to change their condition, and turned to the Pride Arken for such an opportunity in 307 AC. The being agreed to their pact, and transformed them into the first Manathar, before then approaching different Void Worshipers across Aloria and offered them a similar transformation into this new Affliction. Many accepted, among them a high number of Silven, and were thus transformed into the three Legions. Pride emparted them with guiding principles, based on the concepts of the original Dread Kathar Manathar, and also gave them the ability to turn other, willing supplicants of the Nelfin Races, before stepping back and allowing affairs to play out. Unfortunately for the Arken’s goals or designs, many Manathar failed to adhere to these principles. While The Mentor, as Pride became known among the Manathar, had created powerful and unique beings, many misused the gifts, or broke away from the Legions who had trouble even working together in many instances. Additionally, while their bodies had been changed, their minds had not been altered sufficiently by the experience, so original enmities and bias creeped into the Manathar. This eventually called The Mentor out, who set down new rules of internal faith and governance while also tweaking the powers present in each of the Legions. But, ultimately, this was not enough. In 310 AC, the Arken chose to finally cut the thread of Magic that gave the Manathar their powers, instantly reverting all of them back overnight to their prior state. While there was some initial confusion on why this happened, later searches for answers revealed that the Arken had been disappointed in their children. Many former Manathar are just grateful that the being simply disbanded the Affliction as a failure, rather than punish them for disappointing them.

The Manathar had a broad range of visual differences based on their individual Legions, however all possessed the traits of horns, a tail, and golden irises with dark gray eyes or black eye-whites. Silven Manathar were distinguished by a red limbal ring around their irises, being the only exception to the Affliction’s shared similarities. These changes never rendered them unrecognizable, but were also seen as permanent, with no possibility of altering one’s form or appearance further. 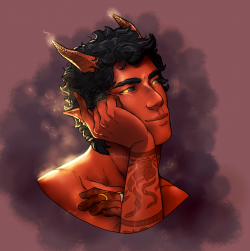 The Apostle Legion often end up being considered living Demons by the everyday citizenry of Aloria given their horned appearance, a trait commonly believed to denote the demonic powers of the Void.

As mentioned before, the diversity of the Manathar was broken into the three Legions, each having a role to play in the new society Pride sought to create with the Affliction.

The Manathar lasted only three years as an Affliction, and there were no indications of unique developmental or lifespan-altering occurrences among the various populations spread across Aloria. As many were already Nelfin before transformation, and such Races are well known for being capable of slowing or pausing their age appearance, many believe the Affliction did not affect this trait. However, most Manathar groups were relatively insular, and information on this is ultimately irrelevant since no Manathar children were born to the Affliction, and it ended in what amounted to the blink of an eye in Aloria’s long history.

The Manathar were all Nelfin transformed either directly by the Pride Arken, or through a ritual they created, and gifted, to others for the explicit purpose. As a result, their minds did not change from what they had been before. However, the goals of the Manathar should be noted given how they were meant to affect, and influence, their actions. These beliefs were centered on a new life philosophy, the concepts of The Xenophane, which was nearly a second Religion for many of them. For a time, rejecting The Xenophane would immediately incur the wrath of the Praetor (an elected leader of a Manathar community), but it was ultimately transformed into a collection of rough guidelines that any Manathar could follow at their own choosing. The Xenophane included the following tenets:

The original version of The Xenophane from before Pride’s intercession is now largely lost, and even the modified version of The Xenophane followed by the Manathar until 310 AC is commonly discarded by those in the current day. The system of belief did not survive the power plays, machinations, and personal choices of the Manathar themselves, and the failure of well over half of all Manathar not following The Xenophane is often cited as a main reason why Pride came to view them all as failures.

The Manathar were spread out in small pockets across Aloria, with numbers reaching at most, a few thousand. Most were located in the west, with the original group from the lands of the Dread Empire briefly growing in power, with not insignificant political influence. The other notable group could be found in Corontium, and the City of Regalia. Ironically, the Dread War saw Manathar groups clash with one another on battlefields across Altaleï, those loyal to the Dread Empire fighting those from the Regalian Empire and the scattered numbers among the former states of the Allorn Empire.