The Shallow Sea Serpent was once a powerful cousin to the Deep Sea Serpent; an apex predator that infested the freshwaters of Daen and beyond. Unfortunately, the rise and ultimate decline of the Allorn Empire ended their superiority, rendering the animal extinct. It was mostly known for its mythical ability to breathe fire - in reality, this was a unique hunting system that involved rapidly boiling the water and air around its neck. Their skin developed to resist such heat. While the creature is formally considered to be extinct, rumors persist of surviving specimens though most have been confirmed to be nothing more than seals, trees rotting in the water, and overactive imaginations.

The Shallow Sea Serpent was a distant cousin to both the Deep Sea Serpents and the Dragons of Aloria, and long suffered because of these ties, but in the early millennia of its existence it was a powerful inland force. Meraic carvings display them as large and powerful, as does some wall art from the Darkening era of Altalar history. They are one of the few obvious creatures on these murals, but some debate them as being representations of Dragons or other large reptilian creatures. Regardless, by the Awakening, they became much more clearly present in Altalar history. They thrived while the Allorn Empire rose as apex predators of inland lakes, rivers, and other freshwater areas. Their rise was not unchecked and they were certainly not unkillable, but their unique hunting ability made them difficult to kill up close or even at medium ranges. As the Allorn Empire expanded, they discovered they were not the only people to have encountered the Shallow Sea Serpent; the Asha in Ithania knew of them, as did the Drovv of the north. In the Regalian Archipelago, several prominent sites held Serpents who were seen by the local Ailor as the violent, cast-off offspring from Blue Crown Dragons. Some were even rumored to be in Essalonia where the Altalar had attempted at some point to settle a colony. 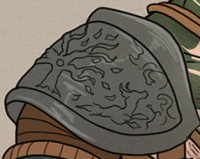 The Loch Lennon Lake Monster, often thought to be a Shallow Sea Serpent, is commonly depicted surrounded by nature with occasional ties to the Old Gods.

As time carried on and the Consolidation gained momentum, Mages across the Allorn Empire worked alongside hunters and weapon experts to hunt them down but to limited effect. The animal was too widely distributed and the growing factionalism in the Empire turned the hunt of these beasts into a game of prestige and power. By the time of the Grandening, the hunt of Shallow Sea Serpents came to an end, leaving what few remained spread out across northern and western Aloria. Left alone, their numbers began to recover, but the Dragon Hunt from 230 to 190 BC ended their time in Aloria. Seen as Draconic and a challenge for Mages and hunters alike, what few remained in Daen were hunted to extinction. Once that was done, hunting parties ranged far and wide, killing what few existed in Drovv-controlled regions, the Regalian Archipelago, and possibly Essalonia. They were declared officially extinct along with the Green Forest Dragon at the end of the Dragon Hunt and are considered so even today. Despite this official stance though, rumors and stories of lake serpents and other creatures plague Aloria’s wild edges. Gallovia, for example, has tales of the Loch Lennon Lake Monster and the Velheim nations in Essalonia tells many strange tales of lake creatures and serpents said to exist in the unoccupied lands on the eastern half of the continent. But for now, all that remains of the Shallow Sea Serpent are bones, stories and ancient, heat-resistant pieces of clothing.

Shallow Sea Serpents were long reptilian creatures with a few unusual traits which marked them as different from their Deep Sea Serpent cousins. Their bodies were serpent-like, ranging anywhere between ten to thirty feet long and ending in a pointed tail. Their head had a narrow flat snout sticking forward filled with noticeable sharp teeth. They had two large reptilian eyes that ranged in color between yellow, blue, and green as well as two small nostrils on the end of their snout. Behind their heads, short, sharp blue or green frills were found on the top of the neck as were curious, gill-looking slits along the underside of the lower neck. These are what popular culture called “smoke gills” as they were supposedly where the fire the creature was capable of breathing released its smoke. These were actually a highly developed hunting mechanism, where the Shallow Sea Serpent would lunge into a school of fish as it opened the vents, instantly boiling the water around itself. Any fish or similar aquatic creature caught in the trap were immediately killed at worst, or severely wounded at best. The reptile then surfaced, venting the water from its gills in a cloud of steam before closing them and feasting on its most-likely floating meal. The inside of the vents was colored bright orange and red, which could be seen faintly when the creature closed its vent slits.

A thick neck several feet in length connected it to the “body,” which was the largest part of the animal (but only by half a foot). At this point, a pair of flipper-like protrusions measuring five feet long stuck out from the body, covered in thick skin and lacking webbing. The Shallow Sea Serpent used them to maneuver underwater, in addition to its shifting tail. This tail also had a colored protocercal fin, either blue or green with hints of orange and red throughout. The rest of the body was somewhat dull in coloration, being earthen tones of blue, green and occasionally brown. Their scale-skin body was highly resistant to heat, likely a response to their own smoke gills and the attacks that other members of their species could levy against them.

The Shallow Sea Serpent was a fairly diverse species, with members spread out over various continents in forms of freshwater. Their size also varied and was not based on gender, as was their coloration. By the time of the Dragon Hunt, they were likely equal in gender despite their few numbers.

The Shallow Sea Serpent’s development is not known to scholars today, as the creatures spent almost all of their youth underwater or in the shadow of their larger and more present mothers. However, it is known that the Shallow Sea Serpent began life as an egg, some believe it to have been laid on dry land in sandy areas before being covered up by the mother and left to mature. Regardless of this, the creatures were known to be quite small when they were born, barely the size of a small dog and brightly colored with brilliant shades of green and blue. They then spent over a decade with their mother, growing and maturing into young adults. At this point, at some time over another ten years, the baby or babies would gradually leave their mother to go find a river, lake, swamp or territory to call their own. They were suspected of being able to live up to a century, with the most notable Shallow Sea Serpent known to the Allorn Empire dying of natural causes and washing ashore after over 120 years of sightings.

The Shallow Sea Serpent was a wild and hostile beast, once the bane of inland river travel in several areas of ancient Daen. As a predator, most scholars believe it would have seen the shadow of boats as either large prey to feast on, or a challenge to their natural dominance at the top of the local aquatic food chain. However, it may be that Altalar attempts to purposefully hunt them drove them to the aggressive tendencies they would come to be characterized with. While the animal was not characterized as kind, scholars of the Allorn Empire did indicate a caring attitude from female Serpents toward their young offspring.

While the early Shallow Sea Serpents are believed to have operated in small family packs of two to five, by 2000 BC, they were solitary creatures that were territorial against others of their species. The only time one could approach was during the mating season, males even allowing other males into their territory for travel though if a female was found and more than one male wanted her, a battle always ensued. Females with one to three young were the only groups of Shallow Sea Serpents seen throughout this period as well.